August 4, 1969, Mariner 7 became the third spacecraft to fly past Mars. Mariner 6 had flown past just a few days earlier, on July 31. The world was still awed by Apollo 11 at this point, which had safely returned its crew to Earth, achieving the grand goal of JFK to impress the world, and now Mariners 6 and 7 focused the world's attention on Mars, returning a total of 198 images of the red planet between them. Alas, the images were looking increasingly lifeless, though the later Mariner 8-9 missions would return much more detailed information suggesting that Mars, though dry now, had once been wet.

As a footnote, today is also the two-year anniversary of Mars Phoenix Lander, which launched August 4, 2007 from Cape Canaveral Air Station. Phoenix landed in the polar regions of Mars, partially duplicating the lost Mars Polar Lander mission, and was highly successful. Though scientists continue to debate the significance of various images, it may also have been the first spacecraft to image liquid water in the open on the surface of Mars.
3

Another fascinating anniversary. Hot on the heels of Apollo 11.

Also Mariner 7 was the first to return decent data & images of the Martian south polar region. Mariner 6 which went past just prior too a more equatorial pass. 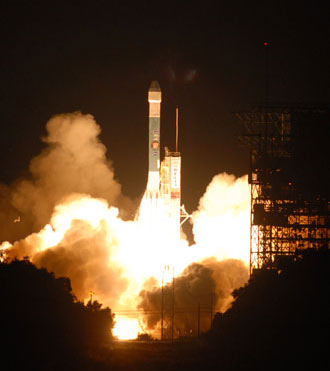 Noctilucent Cloud left behind by the Delta 2 that launched Phoenix Mars Lander in the dawn twilight. To the right is the star Betelgeuse / Alpha Orionis.