Antarctica's Denman Glacier is sinking into the world's deepest canyon

The Earth has been going thru it's cycles and now it is getting back to where it was before the Ice Age, Humans can't change the cycles , we have to learn to adapt to the changes . And like all living things in our past some did not adapt and are now extinct and some have adapted and evolved to live in the climate of today.
C

If it's all below sea level how is that going to cause a rise of 5 feet in global sea level?
C

Abdelazziz said:
Easy, this ice is not floating, but anchored on land, if molten, sea water will enter to the previous submarine level, but all ice above, kilometres of it, will flow once thawed. Not?
Click to expand...

Yes, I see your point, but I was only talking about how ice and water volumes change and affect sea level. When an iceberg is in isostatic equilibrium with the ocean around it, the mass of ice that is below the sea level is about 90% of the total ice mass, and the mass above sea level is about 10% of the total mass. However, the volume of the ice below sea level also represents the entire volume of the meltwater, once all the ice has melted. The ice above sea level does not add to that total volume, but it does add to the mass.
However, in the article, the entire volume of ice that is frozen into the 11,000 foot deep canyon will be reduced in volume by 10% when it melts, so that space will be occupied by a larger mass of seawater, since it's denser. Of course, continental ice that is above sea level will add to the sea volume as it melts, which will raise the sea level, assuming no continental rebound occurs.
K

Without being grounded the glacier and the ice that is backed up behind - more than a kilometre of it above the effective sea level within that canyon if I am reading the diagram provided correctly - will flow faster, if not break up. This is a major glacier in a part of Antarctica thought to be at lower risk of rapid ice loss than the Western Antarctic Ice Sheet and will be in addition.

There will be rebound from the loss of mass, raising the land level and the effect should be amplified by one of the counter-intuitive outcomes of ice sheet loss; locally sea levels fall, not rise, because the decrease in mass reduces the local gravity, but this grounding line is hundreds of metres under current sea levels, too deep for falling sea levels or rising land to save. 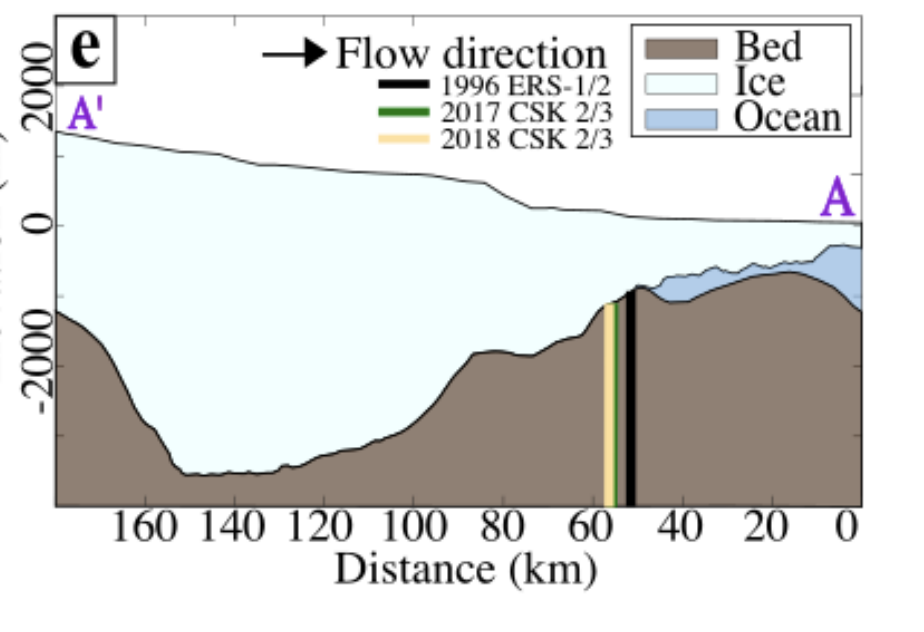 The headline:
Antarctica's Denman Glacier is sinking into the world's deepest canyon
Is objectively wrong.
Presumeably some space.com staffer who didn't comprehend the article wrote that sensationalist headline.

The "world's deepest (terrestrial) canyon" is already full of Denman Glacier ice hence the glacier cannot "sink" into it.
Seems odd to measure a "terrestrial" canyon based on sea-level rather than by the difference in elevation of the rock structure.
Perhaps measuring it as a true terrestrial canyon would be, it's depth might not be TheDeepest ?
Seems to me it is a (non-deepest) marine canyon which happens to be full of ice - frozen seawater - which is not technically part of the glacier.
I expect the glacier, the freshwater ice which precipitated and compressed, possibly flows over the marine-ice-filled trench en-route to the sea.

The essential bit here is the trench holds back and slows down the rate of advancement of the "inland" glacier.
Once the grounding point is breached - which is unlikely to occur as a cataclysmic event but as an incremental diminshing-rate advance down the trench slope, the undermining of the ice by seawater both melts it from below, and reduces the resistance to ice-advancement by "unmooring" it.

My guess is that the further the grounding point advances inward or rather retreats, the less thermal energy would be carried in to melt the ice further.
I was speculating whether the lower-density meltwater could cause a convection current sufficient to draw (low density) warm ocean water down to the grounding point.

Come to think of it, at the time of the freezing of the poles, sea level would have been much higher than it is now. I was apprised that I was conceiving of the old pole-centric glaciation model which is now succeeded by the distributed high-altitude glaciation model.
no matter how much sea level were drawn down by global mid latitude glaciation, that trench would be flooded at least 3000m deep when polar glaciation commenced.
It is hard to imagine that trench freezing from the top down...
The ice has an insulating effect slowing down further freezing.
At some point that marine trench would have been ice-capped with the depths still seawater.

I'm also curious if there is an elevation above which the glacier ice is freshwater and below which it is seawater.