Can anyone help me figure this out?

Wolfshadw said:
I've seen aircraft lights stay "motionless" and grow for as much as seven minutes. If it weren't for the angle of view (only 20° to 30° from overhead) the OP reports, I would suspect it was an aircraft. My view was only about 15° above the horizon.

In that case, now that I'm thinking about it, would be motionless. So, that depend on the angle!

Wolfshadw said:
I've seen aircraft lights stay "motionless" and grow for as much as seven minutes. If it weren't for the angle of view (only 20° to 30° from overhead) the OP reports, I would suspect it was an aircraft. My view was only about 15° above the horizon.

I really doubt if that's what actually happened with notme, at least, the description doesn't match my imagination of an airplane standing motionless for 5 minutes, does it?
Reactions: Catastrophe

notme said:
Yeah, I tend not to worry about pro bono proctologists from other star systems showing up unannounced in my bedroom, although I did see something a bit more "alien" flying around once. That one's a bit harder to explain and I didn't think this was the best place to bring that particular sighting up, haha

Thanks for the help though, I'm glad I finally have an answer
Click to expand...

Maybe it was a guiding light for those Sailors. The sea has always had strange things and stories like this happen.
Luminescent fog, which is nothing but low laying clouds that could have been at a differant altitude. Just a guess.
The Scottish Moors have a fog that is only about two or three feet deep on the ground. Made for some classic horror movies lol.
Perhaps that light was the moon, or Jupiter that seemed to get bigger as the fog thickened, a magnifying effect.
I still think it's atmospherics.
Last edited: Jul 17, 2021

IG2007 said:
I really doubt if that's what actually happened with notme, at least, the description doesn't match my imagination of an airplane standing motionless for 5 minutes, does it?
Click to expand...

Coming from the angular height the OP mentions, no. Almost certainly not an aircraft. Just a quick an dirty depiction of my experience. Remember my POV is from about 15° above the horizon (image not to scale). 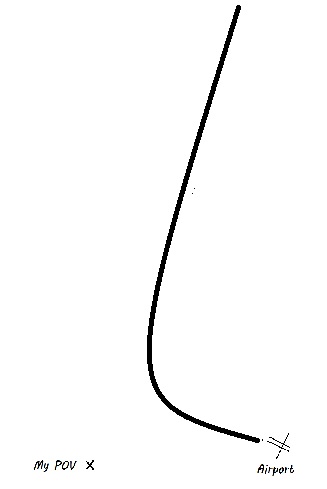 Clovis said:
Sailors out on the open ocean have seen the very same thing. Out where there was no light pollution. They had a lot of differant names for it. An omen, guiding light, witches moon, things like that.
Click to expand...

I saw anything similar in nature, but after that hit my face some firefly.
N

johnz said:
I saw anything similar in nature, but after that hit my face some firefly.
Click to expand...

Thank You for the post. It was really an interesting incidents !! What you saw on that night was a meteor. When any meteor enters into the Earth's atmosphere, it get a speeds up to 72 kilometers per second.

It is the tremendous friction with the atmosphere, that causes the meteor glow, and to ultimately disintegrate before reaching the Earth's surface.

I would agree with the meteor suggestion. If there is a meteor shower, and you are in line with their approach, one can see streaks of light appearing to originate from a centre. Now, rarely, instead of seeing meteors spreading out from this centre, you happen to be in the absolutely direct line of one, you would see the following:
At first, from nothing, you would see a faint light appearing stationary. This is as the meteor begins to get hot enough from friction to appear to brighten. As the frictional heating increases, it appears to get brighter and brighter. Because of the way our eyes work, this means that it also appears to get bigger. This may be also partly due to the fact that the meteor is approaching. After appearing brighter/bigger, the meteor burnt out, and so appeared to disappear. In fact, your eye would retain an image of the brightness for a short while.
According to this suggestion, had the meteorite been larger, it might have become a meteorite, which means that it would have landed, quite close to you. Had it been much, much larger ( and this is most unlikely ), you might have become as famous as the dinosaurs.

Also, do you have the date of the occurrence? Year not essential. There are meteor showers at fixed times throughout the year as we pass through the broken up remains of asteroids.

What this grow and vane light recalls me is a temporary atmospheric event, density change, windshear,...acting as lens to the light from an ordinary star or planet. Blessings +

Thank you. I prefer the meteor idea.

notme said:
Hello everyone, I was hoping someone might be able to help me figure out something odd I saw one night a few years ago?

There are a couple of explanations that came to mind, but they don't really seem to fit what I saw, so maybe someone who knows more about this kind of stuff than me could help...

I was out walking my sisters dog around 10 or 11pm on a clear night, and there's a tree that she likes to stop and sniff around for a while (the dog, not my sister), and I'll usually stare up at the stars when they're out. So there I was, looking up at what I thought was Venus since it was quite a bit brighter and bigger than all the other stars, when I noticed it was getting bigger. I probably thought it was my eyes focusing on it or something, but it got even bigger... and bigger... until it was (my memory's slightly hazy on exactly how big it got) between half to the full size of the moon. It then proceeded to shrink down to its former size before shrinking even further into nothingness. It all lasted about 30-60 seconds, was very smooth in it's transition, and was kind of like a long pulse. It didn't change shape at all, it was a perfect circle. I can't recall whether the brightness changed as it grew in size or whether it stayed uniform, but it was certainly as bright as a full moon whilst it was at that size. There wasn't any noise either.

I've been perplexed ever since, and often thought about asking people in some kind of forum what they think it could have been, so here I am asking if any of you know what the hell I saw! My first thought was supernova, but I'm pretty sure that's wrong for various reasons. Then I thought maybe a meteorite, but I've seen plenty of those in videos and they're nothing at all like that was, so I'm at a loss. I live in rural England, if that helps?

Thanks to anyone who might be able to shed any light on this damn thing.
Click to expand...

It might help if we knew your location and the date this occurred.

Sprites occur to quickly so I don't think it's that.

This is what I have been looking for:

This is what you see if the shower is coming towards you. Further out, you see diverging streaks. If coming directly towards you, you just see bright light increasing and then going out (otherwise it lands near you).