Comet NEOWISE is closest to Earth tonight. Here's how to see it live online.

The bright Comet NEOWISE makes its closest approach to Earth tonight (July 22). If you miss the naked-eye comet tonight, you'll have another chance to see it in two live webcasts on Thursday (July 23).

Comet NEOWISE is closest to Earth tonight. Here's how to see it live online. : Read more

Well, NO JOY on spotting NEOWISE for me, this evening. The skies finally cleared after being cloudy all day, but even though I had a clear LOS on URSA Major and below, I could not spot the comet with the naked eye (10:25 CDT). I suspect too much light pollution (Downtown Minneapolis in that direction) and my failing eyesight.

I did see two unknowns, however, intersect their paths. I suspect they were satellites as at this time of night, even with low flying aircraft, about all you see are the flashing anti-collision lights.

The first I saw was a steady light, moving in a northerly direction. I've seen satellites before and this seemed to have the right speed as it crossed the sky. The other, I found more interesting because it wasn't a steady light. It did oscillate, but at such a slow rate there's no way it could have been some type of aircraft. It literally would disappear for between two and three seconds and then appear again for a second or more. A steady rate and a straight path (as with the first). My guess would be some sort of rotating satellite (or debris), occasionally reflecting sunlight down to Earth. 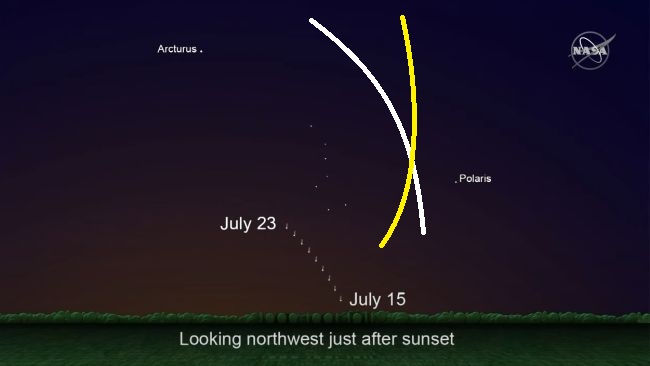 Edit: And I checked. ISS was nowhere in the vicinity.

I saw it tonight using 9x25 Nikon binoculars intended for birdwatching. It is slightly above the Tania stars at the edge of Ursa Major, but definitely not naked eye. It was predicted in the Space.com article to be Mag 2 tonight, but I put it more like Mag 5. It was dimmer than the Tania stars which are Mag 4.

Clouds, light pollution and trees have foiled me so far...

I saw it again this evening, it's getting very faint now. My little Nikons could only help me see a fuzzy ball, but no tail was visible. It has moved considerably up and to the left from its position in Ursa Major last night, but the two Tania stars can still be used as a reference point.

I have a small 100mm Reflector I am bringing out tonight if the skies clear. I am getting really bummed out that I have yet to spot it.

From the island of Kauai me and my kids saw it last night. It was pretty faint, and the bright crescent moon didn't help. My kids could instantly see it, for me however, had to look at it indirectly as my eyes are getting old.
Reactions: Lovethrust and Wolfshadw
You must log in or register to reply here.
Share:
Facebook Twitter Reddit Pinterest Tumblr WhatsApp Email Link