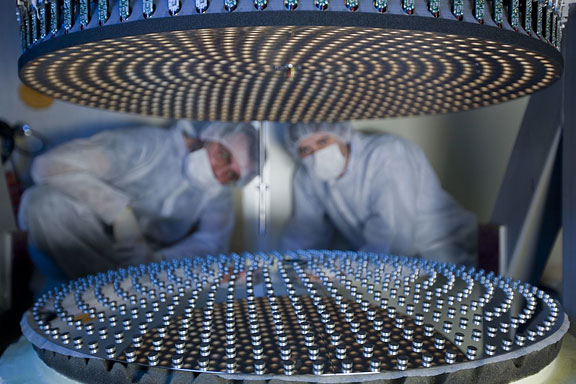 The next generation of adaptive optics has arrived at the Large Binocular Telescope (LBT) in Arizona, providing astronomers with a new level of image sharpness never before seen. Developed in a collaboration between Italy's Arcetri Observatory of the Istituto Nazionale di Astrofisica (INAF) and the University of Arizona's Steward Observatory, this technology represents a remarkable step forward for astronomy.

Until relatively recently, ground-based telescopes had to live with wavefront distortion caused by the Earth's atmosphere that significantly blurred the images of distant objects (this is why stars appear to twinkle to the human eye). While there have been advancements in adaptive optics technology to correct atmospheric blurring, the LBT's innovative system truly takes this concept to a whole new level.

In closed-dome tests beginning May 12 and sky tests every night since May 25, astronomer Simone Esposito and his INAF team tested the new device, achieving exceptional results. The LBT's adaptive optics system, called the First Light Adaptive Optics system (FLAO), immediately outperformed all other comparable systems, delivering an image quality greater than three times sharper than the Hubble Space Telescope using just one of the LBT's two 8.4 meter mirrors. When the adaptive optics are in place for both mirrors and their light is combined appropriately, it is expected that the LBT will achieve image sharpness ten times that of the Hubble.
Click to expand...

I can't link this video here, but is very nice :

Slow motion movie showing the transition from atmospheric blurring to correction by the LBT adaptive optics system. The higher resolution easily separates the two previously blended star images, and the third more distant object can be detected above the background because its light is also more concentrated.
Click to expand...

The Large Binocular Telescope (LBT, originally named the Columbus Project) is located on 10,700-foot Mount Graham in the Pinaleno Mountains of southeastern Arizona and is a part of the Mount Graham International Observatory. The LBT is one of the world's highest resolution and most technologically advanced optical telescopes
Click to expand...

Wow.
It'll be interesting to see the consequent developments for space telescopes.
E

SDC : Telescope Takes Sharpest Pictures of Space Yet From Earth

A telescope in Arizona has taken the sharpest pictures yet of deep space from Earth with a new system that provides a level of clarity never seen before.

The technology relies on adaptive optics – a mechanism that allows a telescope's mirror to bend in order to compensate for the blurring of light as it passes through the Earth's atmosphere.

The new system, installed on the $120 million Large Binocular Telescope (LBT) on Mount Graham in Arizona, has delivered images three times sharper than the Hubble Space Telescope, LBT scientists said. And that's with only one of its twin 27.6-foot (8.4-meter) mirrors working.

"The results on the first night were so extraordinary that we thought it might be a fluke, but every night since then the adaptive optics have continued to exceed all expectations," said astronomer Simone Esposito, leader of a team from Italy's Arcetri Observatory of the Istituto Nazionale di Astrofisica (INAF). "These results were achieved using only one of LBT's mirrors. Imagine the potential when we have adaptive optics on both of LBT's giant eyes."
Click to expand...