And these wonderful pictures need to be here, in this forum.

I also posted this in The Unexplained. It explains.
I also poasted a thread about the lunar landing denialists in Free Space. An opportunity to gloat, or disparage.
F

Of course, we all know their answer, well those photos were obviously faked too!

What a wonderful present for all of we 400,000 or so that worked so hard to get those men to the moon! And just at the right time to!!
3

I have worked on the Apollo 15 LRO LROC NAC image (Lunar Reconnaissance Orbiter Camera, Narrow Angle) & annotated it myself. Area approx 300 metres across, cropped out, enlarged 300%, sharpened & labled by me.

I will be doing ALL of them so please be patent as these take time to do.

BTW, some guidance please. Would it be best for me to post them here, or on the LRO/LCROSS thread in M & L? I do not wish to be thought of spamming the boards with my stuff.

I have done this one on the Apollo 17 LRO LROC NAC image (Lunar Reconnaissance Orbiter Camera, Narrow Angle) & annotated it myself. Area approx 250 metres across, cropped out, enlarged 300%, sharpened & labled by me.

Edited, got confused with the CM America. LM was Challenger. Did a new image & replaced incorrect one.

This is excellent news !!

Of course, we all know their answer, well those photos were obviously faked too! ...
Click to expand...

Apollo 11, LM Eagle in the late lunar afternoon Sun, my effort. Crop is about 220 metres wide.

Apollo 14 LM Antares, with tracks & ALSEP, left behind by Edgar Mitchell & Alan Shepard. Landing struts on LM Antares are visible & there is a hint of the antenna. Scene approx 400 metres across. Late lunar afternoon Sun.

Apollo 16 one was the most difficult one to do, due to the nature of the highland terrain in the Descartes area.

The LM Orion was easy enough to see & it is possible to see the landing struts. There are hints of tracks, left by John Young & Charlie Duke with the LRV, though very faint, leading off to the lower left & I could not make out ALSEP or the LRV, though there are two positive relief features to the left close by. Could be them, but are difficult to see in all of that detail of tiny craters, etc in the late lunar afternoon Sun.

There is a dark spot to the upper right of Orion, with a hint of a track to it & past it. Is that the seismic experiment with the pyrotechnics carried out by John Young???????? Or is that too close to LM Orion?

Good work with those enlargements there Andrew, thanks!

Check out Tearman's post (3rd down from his op) in a thread he started at UFO Casebook about the LRO pictures here.

He's overlayed four stills from the original Apollo 11 landing video onto the LRO picture of the Apollo 11 site and the landscape matches up.
E

Smersh":2mq4ds16 said:
Check out Tearman's post (3rd down from his op) in a thread he started at UFO Casebook about the LRO pictures here.
Click to expand...

Lol at the reply under it
F

For many years now astronomers have been using the reflectors set up on the moon by the Apollo astronauts for very accurately (down to millimeters) determining the distance between the Earth and the moon. Now if they can fire lasers up to the moon and bounce them off of such reflectors, I would ask such people as yourself, just who put the reflectors there in the first place if not the Astronauts themselves????

That should be ALL the proof that reasonable and rational people need to tell us that NASA actually landed men on the moon! Are you such a person?

If not, then please take you irrational ramblings over to The Unexplained where it belongs!!!!
F

Comments regarding there being no Lunar Landing do not belong in The Unexplained, they belong the forum called "Totally Absurd Idea", or "The Totally Ridiculous Theory" and last but not least, "The Best Waste of Time Since Time Began."
A note however on the Laser reflector experiment. Laser ranging was conducted using the Lunokhods.
The only thing Conspiracy Theorists will be certain of is their own death.
F

Freya, the Lunokhcods were indeed a great accomplishment of the Russian program, but only one was used for such experiments at all, and many if not all of the Apollo landing sites had such reflectors set up by American astronauts. And these are indeed the main source of the distance lasers fired at the moon!

The basics of this entire system are explained here!

In a paragraph some ways down (about eight paragraphs down, entitled, "But what do we measure to?") in this explanation it mentions that the lasers are reflected both off of a single Lunokhod with a French Reflector attached to it, and American reflectors set in place by the Apollo astronauts. Now I don't know if every Apollo landing site had such reflectors set up, but I do know that one was the Apollo 11 site, and there are at least several others as well!

At the end of the National Geographic program where they talked with the main astronomer in charge of this very worthwhile effort. He stated that the "Apollo Moon Hoax" types had never even visited their telescope site!

The LRO photos look great! That's so cool how everything is still as it was back in 1969. I've heard people say that the moon is so desolate that everything will stay undisturbed for thousands of years.
2

Of course, we all know their answer, well those photos were obviously faked too!

What a wonderful present for all of we 400,000 or so that worked so hard to get those men to the moon! And just at the right time to!!
Click to expand...

Yep, of course. :lol:
The hoax idiots never cease to amaze me. Every debate I have ever seen with an expert and a conspiracy theorist the latter always melts under the facts. It's a shame that we have to waste time and effort on them.
D

Interesting - some of the "debates" I have seen, if the hoax theorist can keep putting out
"But what about ..." until the end of the debate, when they can trot out the "But surely Jim,
a man of your intelligence doesn't believe that the government always tells us the whole truth"
then they, and the hardcore believers will think they won, big.

Ever notice that the conspiracy theorists almost always believe in other hoaxes as well? Many of them think the government created AIDS and that the Holocaust never happened. Just goes to show you the caliber person you're dealing with and rational debate is not possible with them. I wish they would just go away.
D

They seem to have an axiomatic belief that "The government lies about everythiing" to be sure.

i cant believe that i am seeing the remainings of the apollo missions!! it is crazy when i am thinking that an austronaut can now see the footprints that he made 40 years ago... i am speechless...

But i was always wondering if we could see any landing site from earth. Why to expect so many years for the LRO to give evidence of this landings ? why cant we use the strong telescopes that we have on earth (or even hubble) to look up to the moon (as they are supposed that they can see stars that belong to other galaxies)??? does anyone know if this possible?
M

The answer lies in simple physics. In order to resolve (see) objects the telescope must be large enough to seperate the individual points. From the earth's distance, the telescope would need to cover a few states...and there are none that big.
M

so is this really the first time we've been 'back' to the moon in 4o years and yet we've set probes, satellites, rovers to practically ever other single planet and their moons in the solar system?
M

We've been back with varoius spacecraft a about 8 or 9 times since then, but no others have had "eyes" as sharp as this one. And yes, we've spent some time exploring all the plnest of the solar system, a few asteroids and comets, and have missions on the way to the two closest dwarf planets. It's not like we've been sitting around doing nothing.
C

OK, I've been looking at the LRO pics of the Apollo 14 LZ (I just love abbreviations!) until my eyes are crossed. It's awfully hard to make out, but can we in fact see about how close our two intrepid explorers actually came to Cone Crater?

Maybe we can, at last, find out if the decision makers on moon and Earth were in fact "finks" as Mitchell thought...
S

These pics are so much fun. I wish they had just a little more zoom!

I used to know the formula for angular resolution. A good 8" scope can get about 2-3 arc seconds. The moon is a half a degree or so. From that, I would imagine the size of a lunar module at the distance of the Moon is in the tiniest fraction of an arc second. No way even the best telescopes could resolve it. Also, I imagine the light from the moon would not be good for Hubble - way too bright.
3

Recently the LRO has imaged the Apollo 12 / Surveyor 3 site.

LM Intrepid, ALSEP & the unmanned Surveyor 3 lander are all visible. 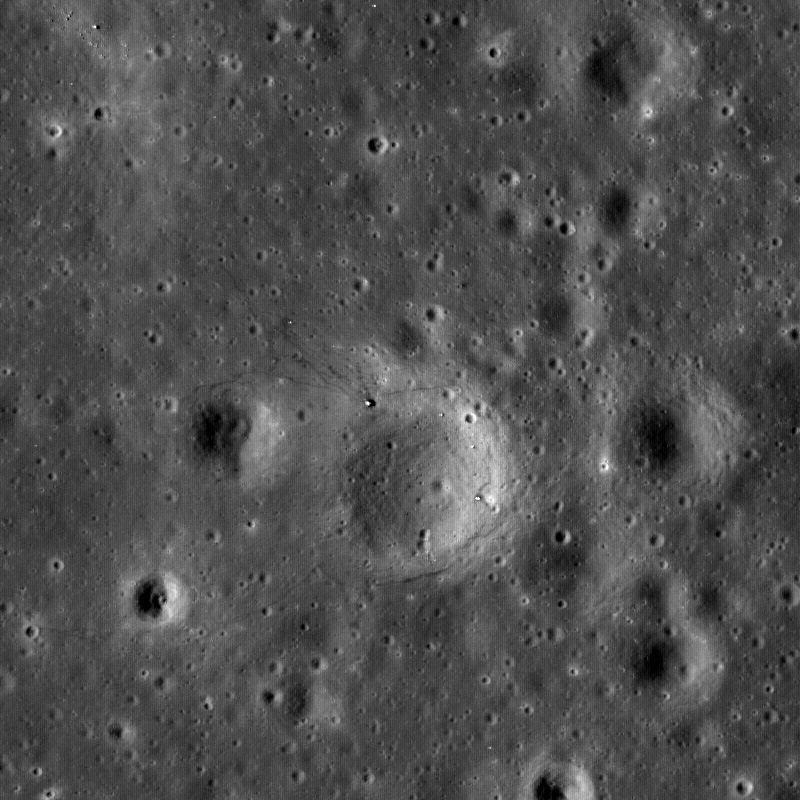 An annotated enlarged crop I did of the Apollo 12 site as seen from LRO.

An enlarged unlabled crop I did of the above. Surveyor Crater which is approx 200 metres wide has come out well, as well as the tracks from LM Intrepid left by Pete Conrad & Alan Bean radiating from LM Intrepid & one going to Surveyor 3.