Hi Wayne, perhaps it's better to say that Block Island is sitting on a pedestal.?

It is possible to see a small outcrop of layered rock immediately beneath Block Island. Perhaps Block Island has protected it from erosion?

If so I wonder if it could be used to make an educated guess as to how long Block Island has been there?

Perhaps not, if it has been buried as that would have delayed erosion!!!!!!

Anyway an enlarged, enhanced crop of the base of Block Island, with the small outcrop of layered, presumably sedimentary rock underneath in the shade.

Ok, I just looked at this rock called 'Block Rock' that is sitting on Mars. They say it is a meteorite, which I'm sure it is... BUT... why did it not leave an impression? Yes, I know Mars' gravity is approx. 38% of Earth's (is that why?), or do I not understand the effects of gravity on falling objects like I thought I did. Did it float down? Or is the impression just too slight to not see? The picture does show a dark shadow around the rock, but it still looks like it is lying on perfectly flat surface.

Am I a nitpicker? For example, the statement that everything in the universe is expanding and moving away from each other... THEN WHY is the Andromeda Galaxy rushing towards us on a collision course (in about 3 billion years).. oh, maybe a collision, but still it seems to be heading in our direction. Maybe a hole in the balloon theory? I have questions, who has answers??? LOL :lol: (my god I am a nitpicker)(sigh)

Well, I havn't heard of the theory that it is a meteorite, most people I think are saying it is a monolith - a hard substrate that was pushed up a long time ago through the surrounding regolith and now that the surrounding has eroded away, the monolith is left.

Although, a large meteorite can land without leaving a large impression if it is slowed to the point that it reaches terminal velocity. This happens quite often on Earth. It is very less likely on Mars considering the thin atmosphere. Maybe it fell long ago when Mars' atmosphere was considerably thicker?

About the expanding universe thing, there are several nearby objects that are speeding towards us. It is only when you look several billion light years away that everything appears to be receding. This makes since with the baloon analogy. Dots further apart initially spread faster than dots initially closer.
S

This is another discussion that doesn not belong in the Physics forum, so I will move it as well..

To address the question, first of all it's called Block Island, and there's been a long discussion about it (with great images) in the Opportunity Mission 2009 and Beyond thread in the Missions and Launches forum. That discussion has also included my description of the impact velocities of such meteorites on Mars.

As to why there's no impression, the meteorite could have landed there a million or a billion years ago. So if there was a dent (crater ) in the surface, the winds of Mars have had millions or billions of years to erase it.

In fact that topic is where I am going to move this discussion. First I'll move it so a copy is here for a few days, then I'll merge it into the Opportunity thread.
3

Thank you very much Wayne for your endorsement of my input here.

This is a most fascinating development for sure in Oppy's vastly extended mission.

Sol 1,974 Front HazCam. Opportunity has moved slightly to the right to reposition herself to get a better view of other parts of Block Island. 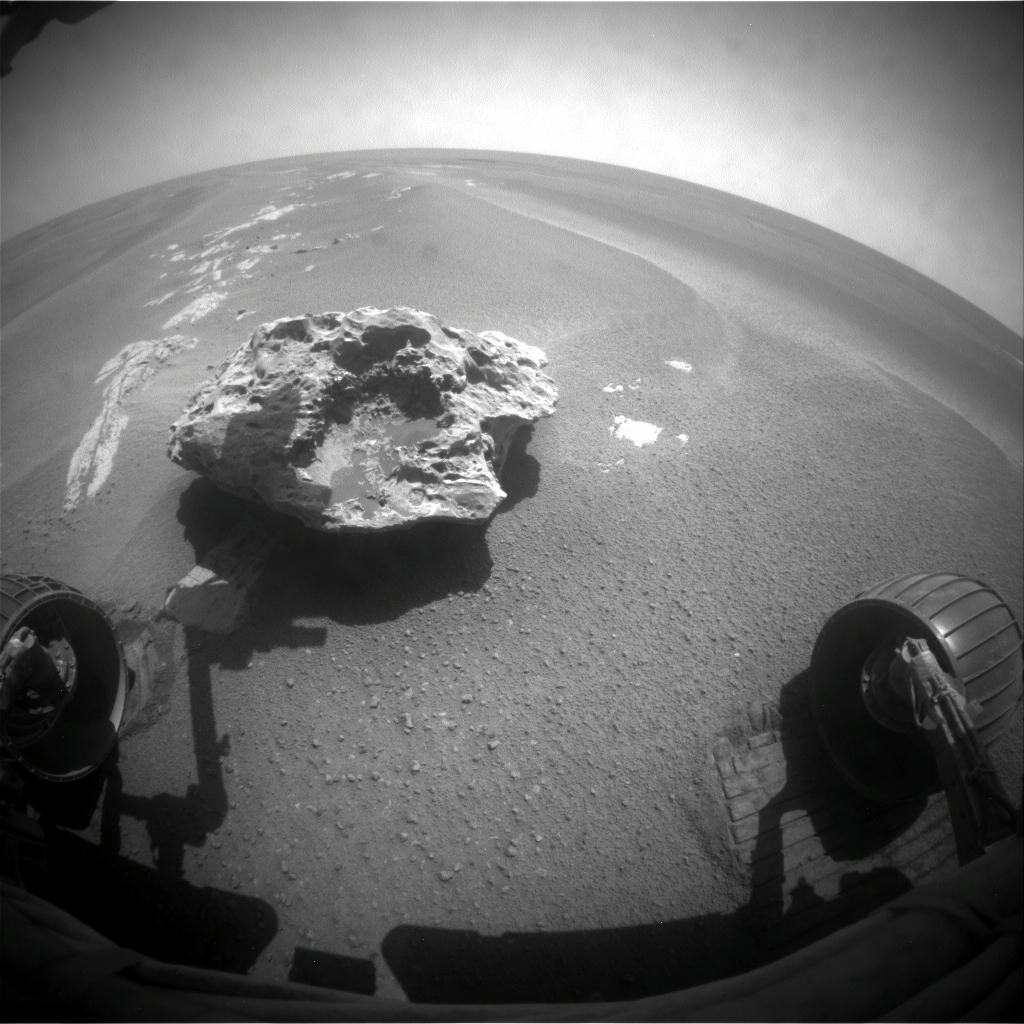 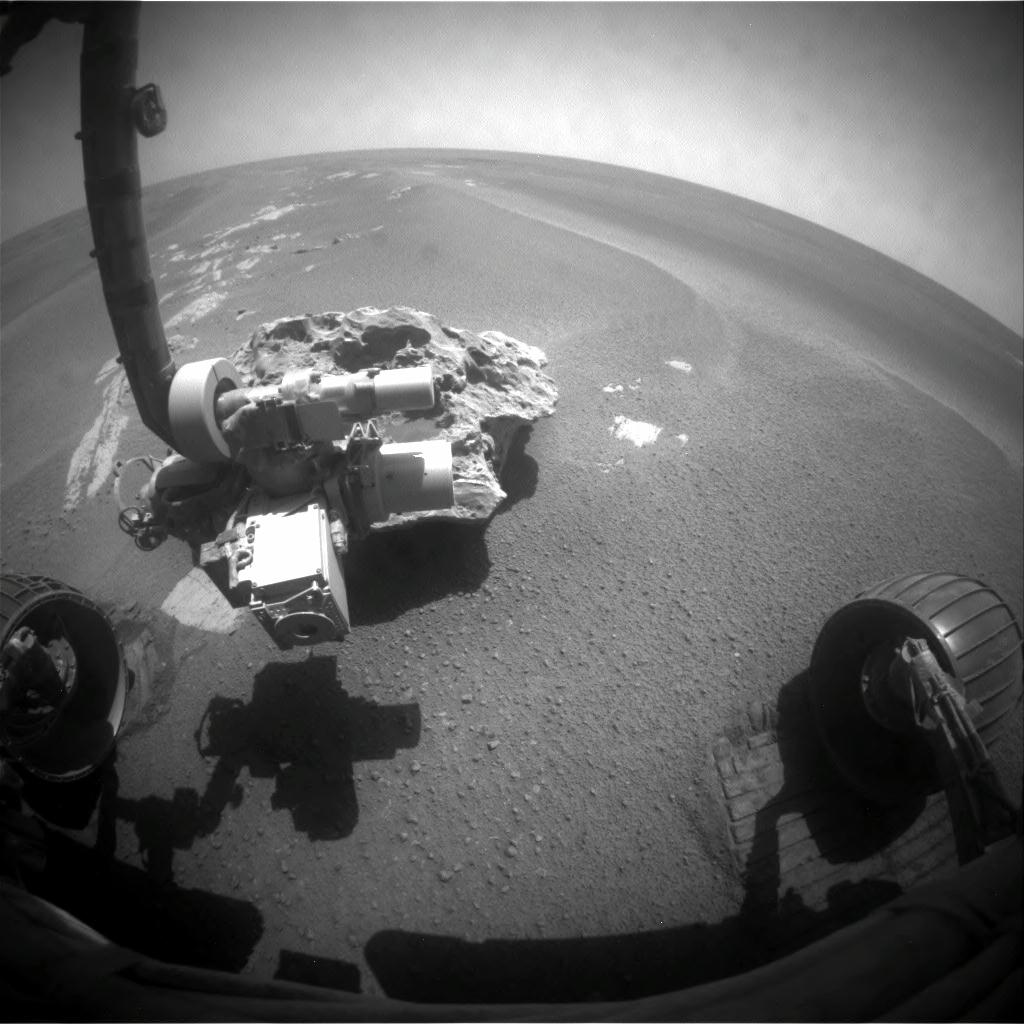 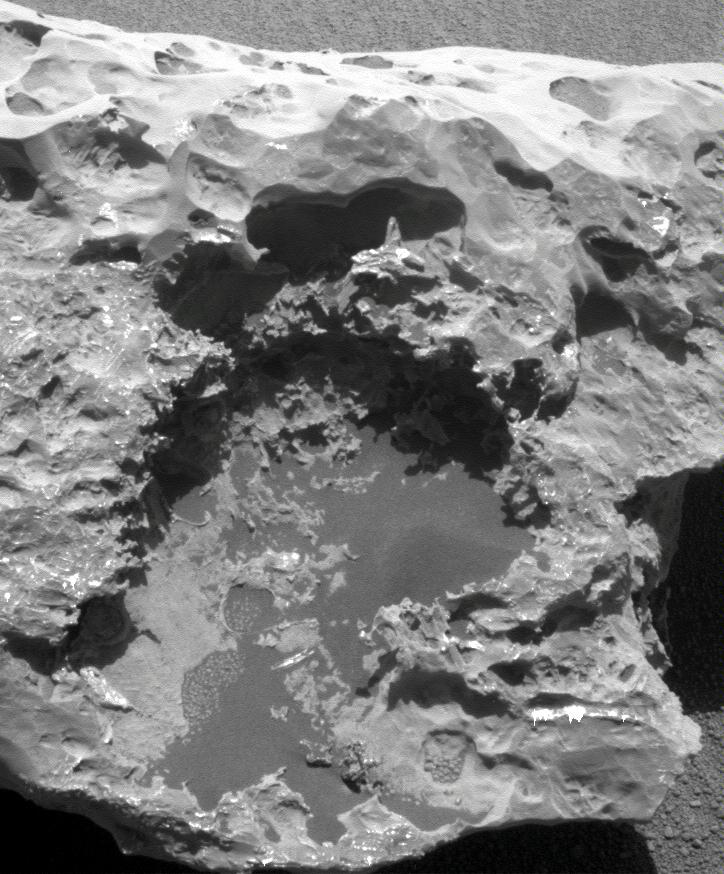 Opportunity has also been imaging the regolith immediately around Block Island meteorite with the Microscopic Imager. Possibly to get clues of when impact occured, etc?????

Sol 1,974 MI images of regolith. Shadow of Block Island meteorite at top. Note how in the second one, the shadow has moved down due to the rotation of Mars, and the frame is also centred further down. 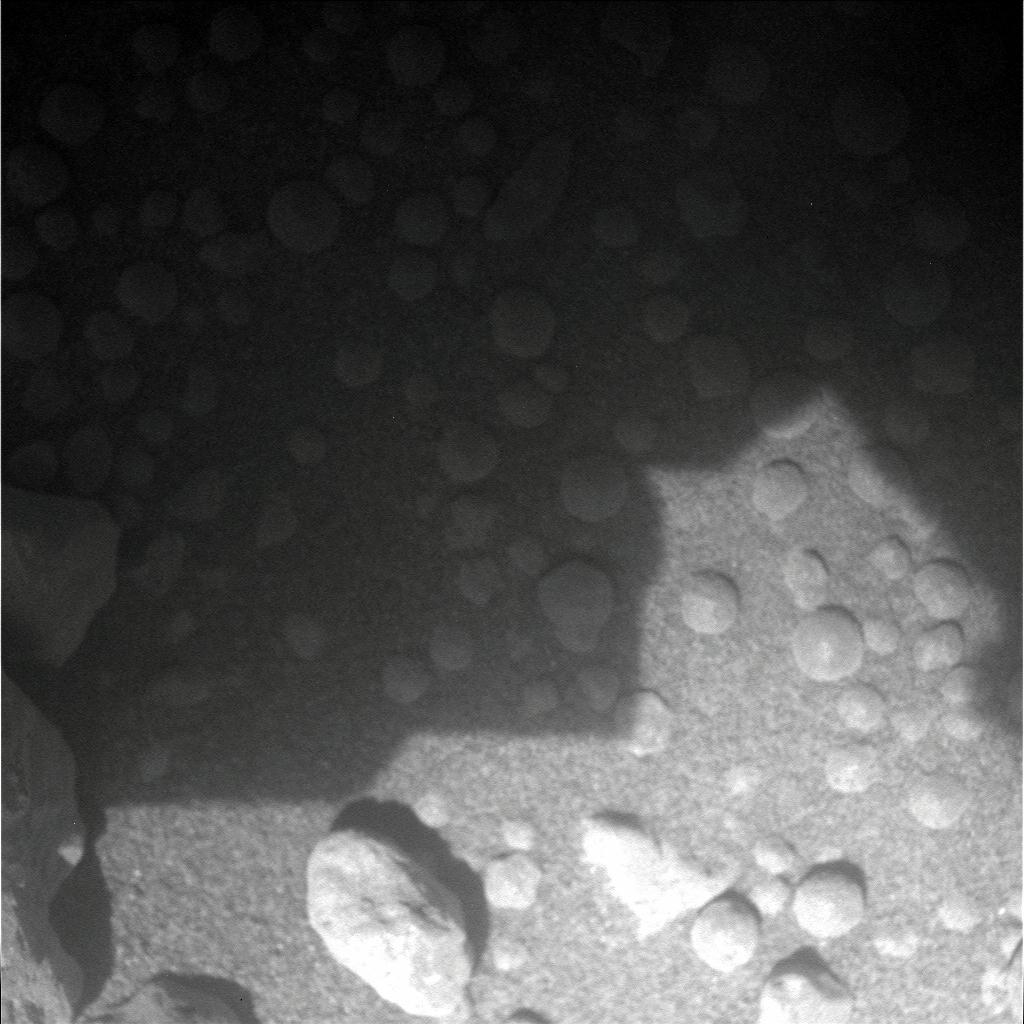 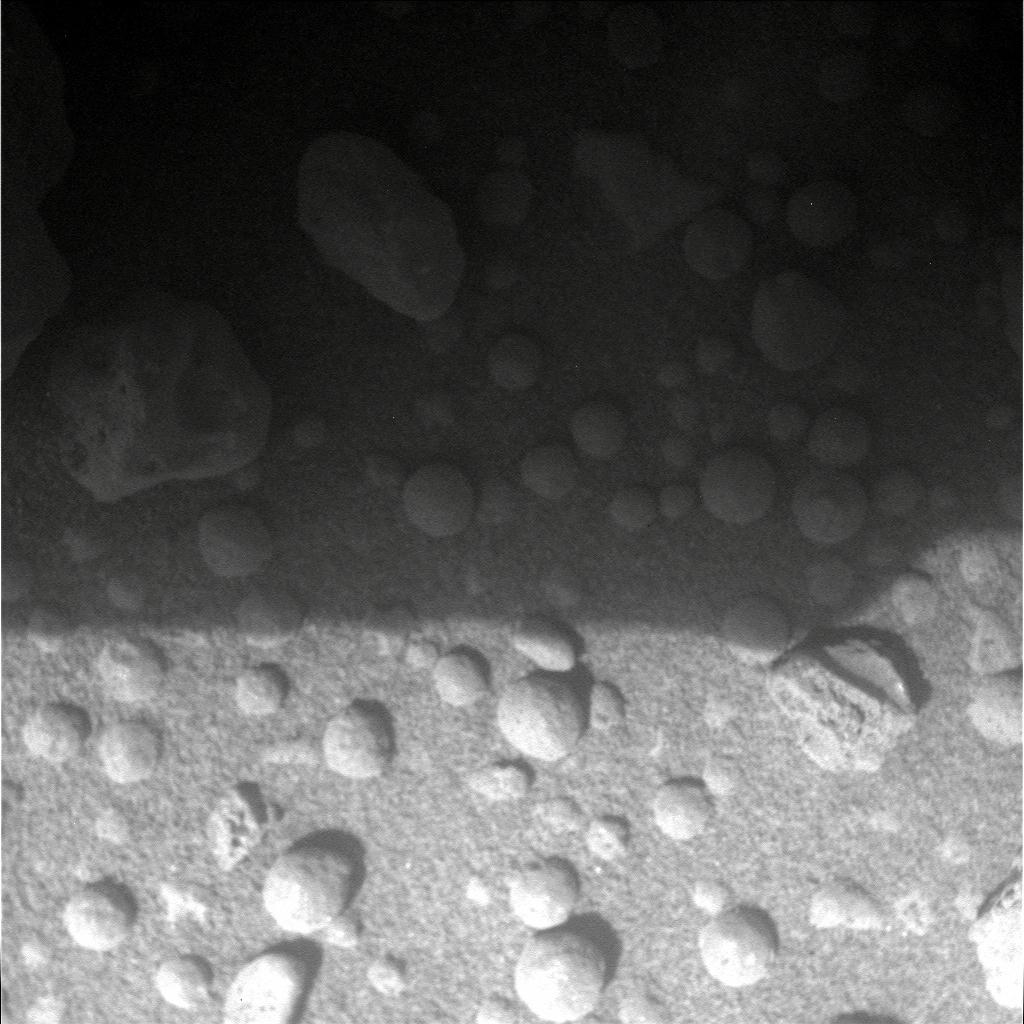 A couple of interesting Sol 1,977 Microscopic Imager images of the Block Island Meteorite. Each side is 3.1 CM. 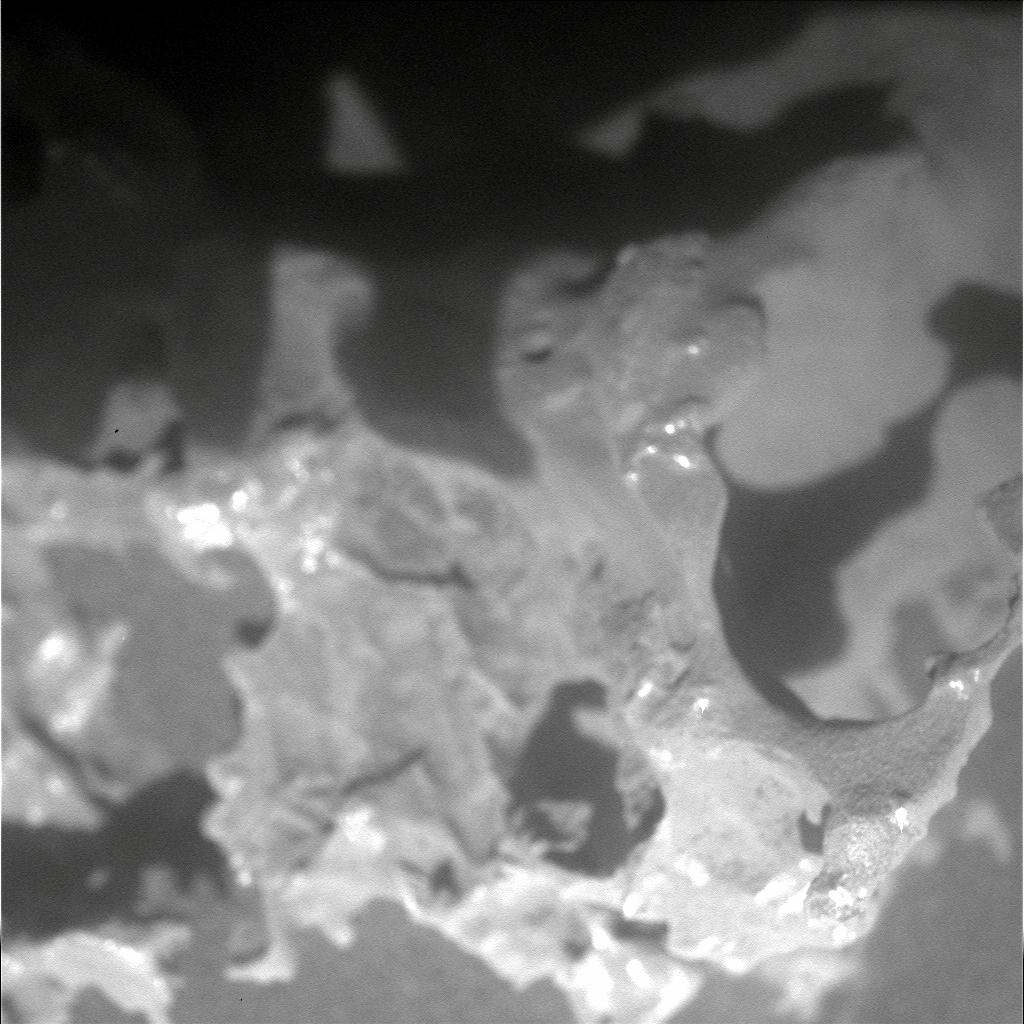 This one shows a metallic protrusion. 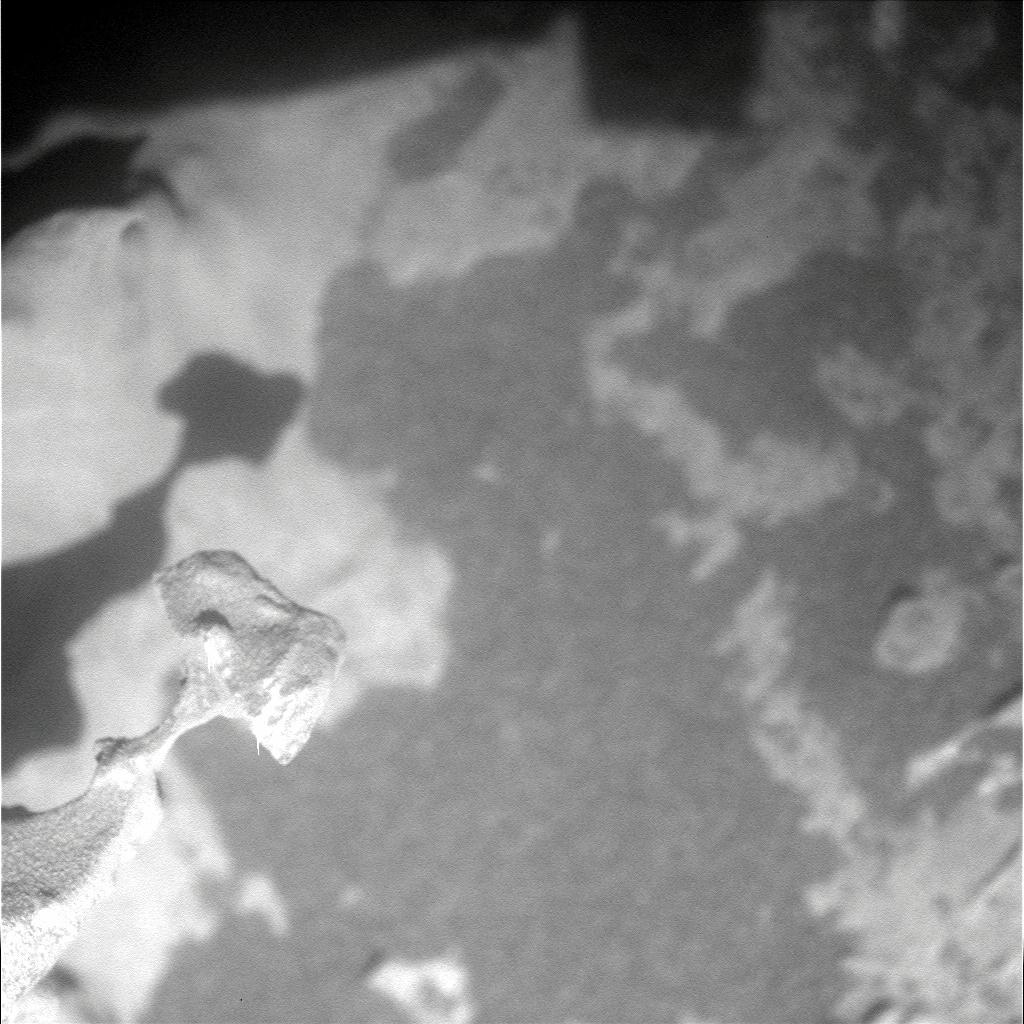 MER B Opportunity has moved 40 CM closer to Block Island Meteorite to enable Microscopic imagery of other parts of this metallic interloper from the Asteroid Belt, that were out of reach earlier. Sol 1,983 Front HazCam view, under a very low sun, I think @ Dawn as MER B Opportunity back tracked a little way along a slightly differnt route to reach Block island. 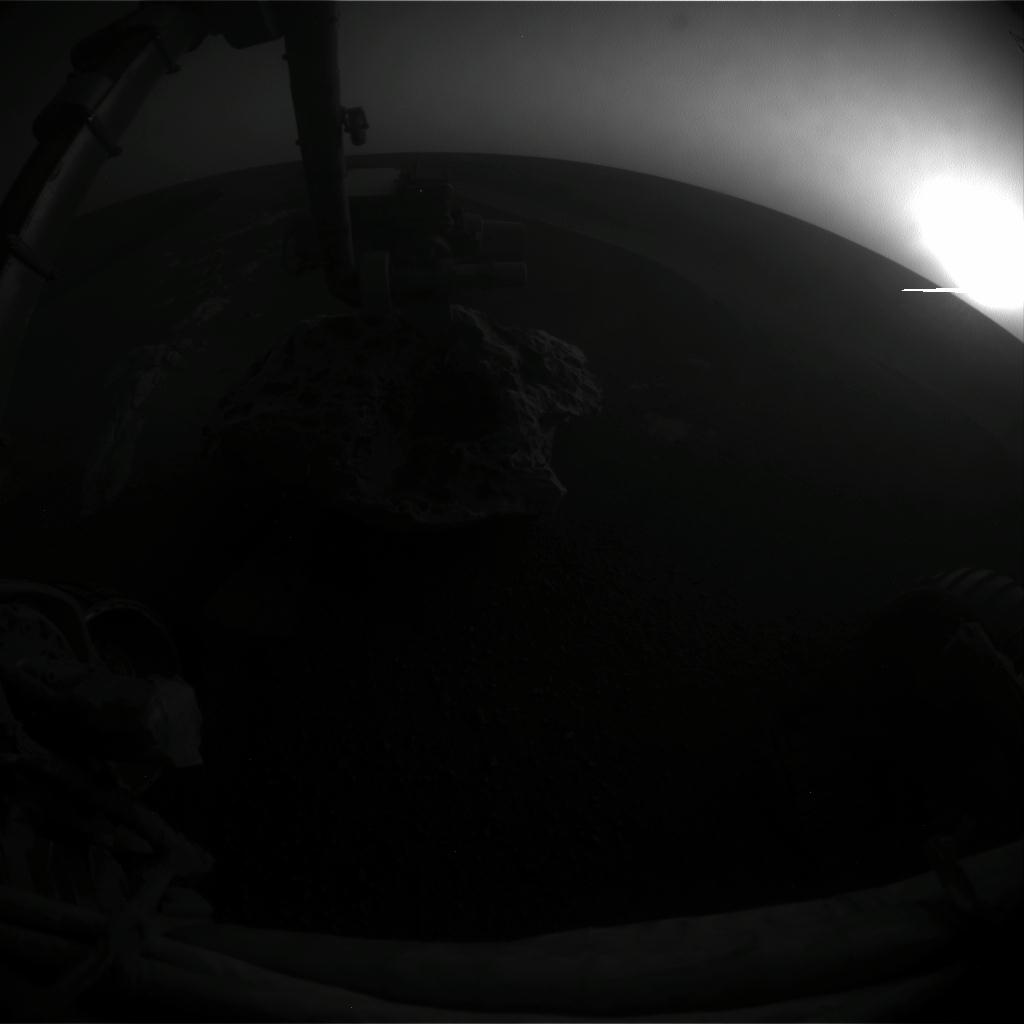 Looks Like Opportunity has now driven right up to Block Island Meteorite, to get access with the arm to the back area & also for the PanCam to get a closer, more detailed view. Sol 1,983. 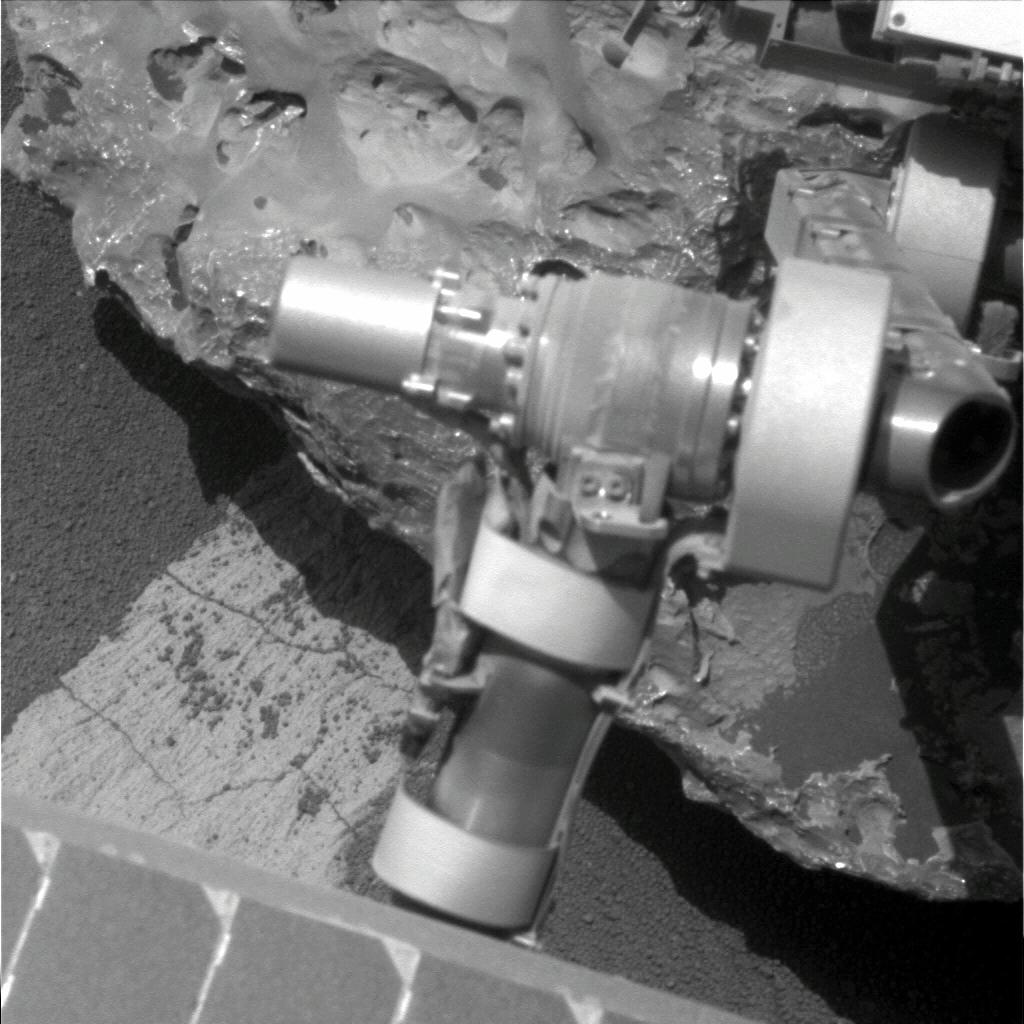 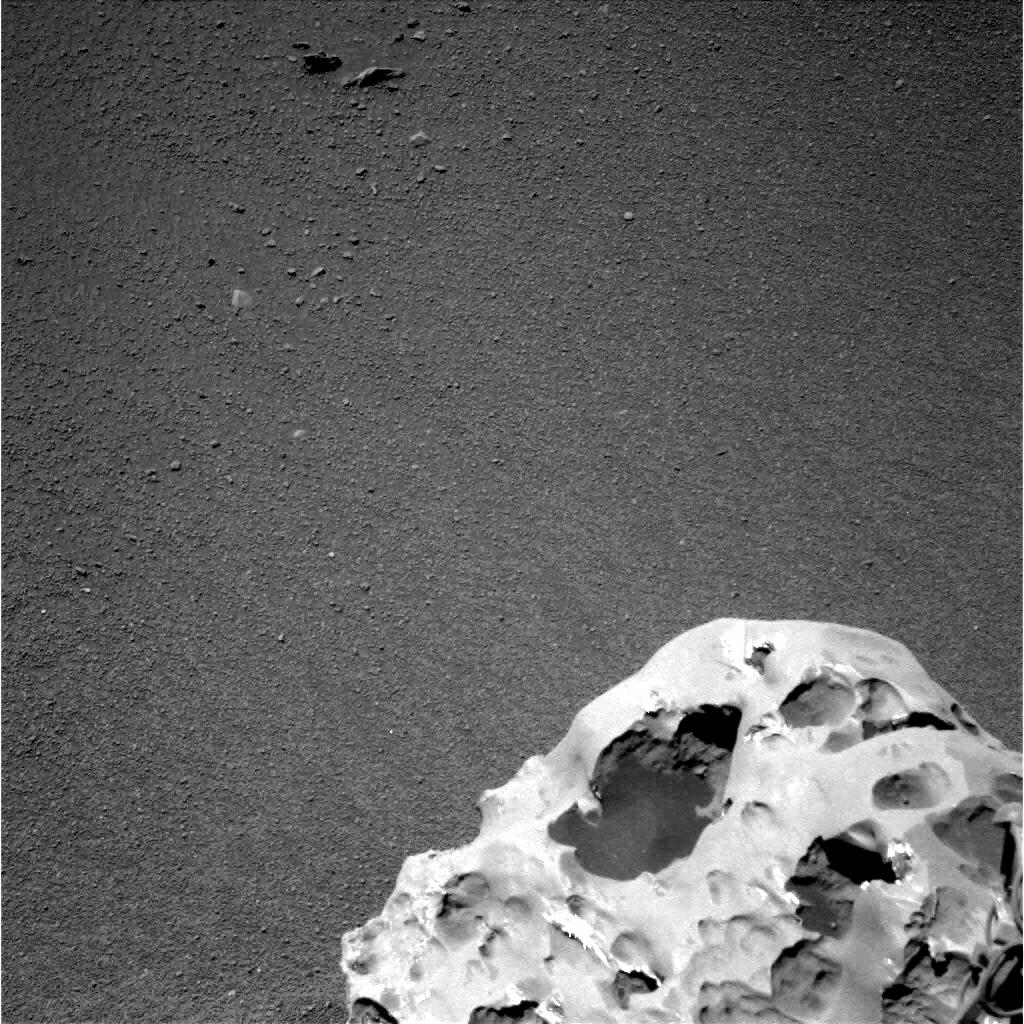 Sol 1,986. MER B Opportunity studies the dusty hollow on Block Island Meteorite with the Microscopic Imager. Sol 1,986 front HazCam view. It is clear how Oppy has driven much closer to Block Island Meteorite.

Also MER B Opportunity has driven around to the 'back' of Block Island Meteorite. Interesting to see what this metallic asteroidal imposter looks like from the other side. :mrgreen:

Block Island Meteorite from the other side. Sol 2,000. 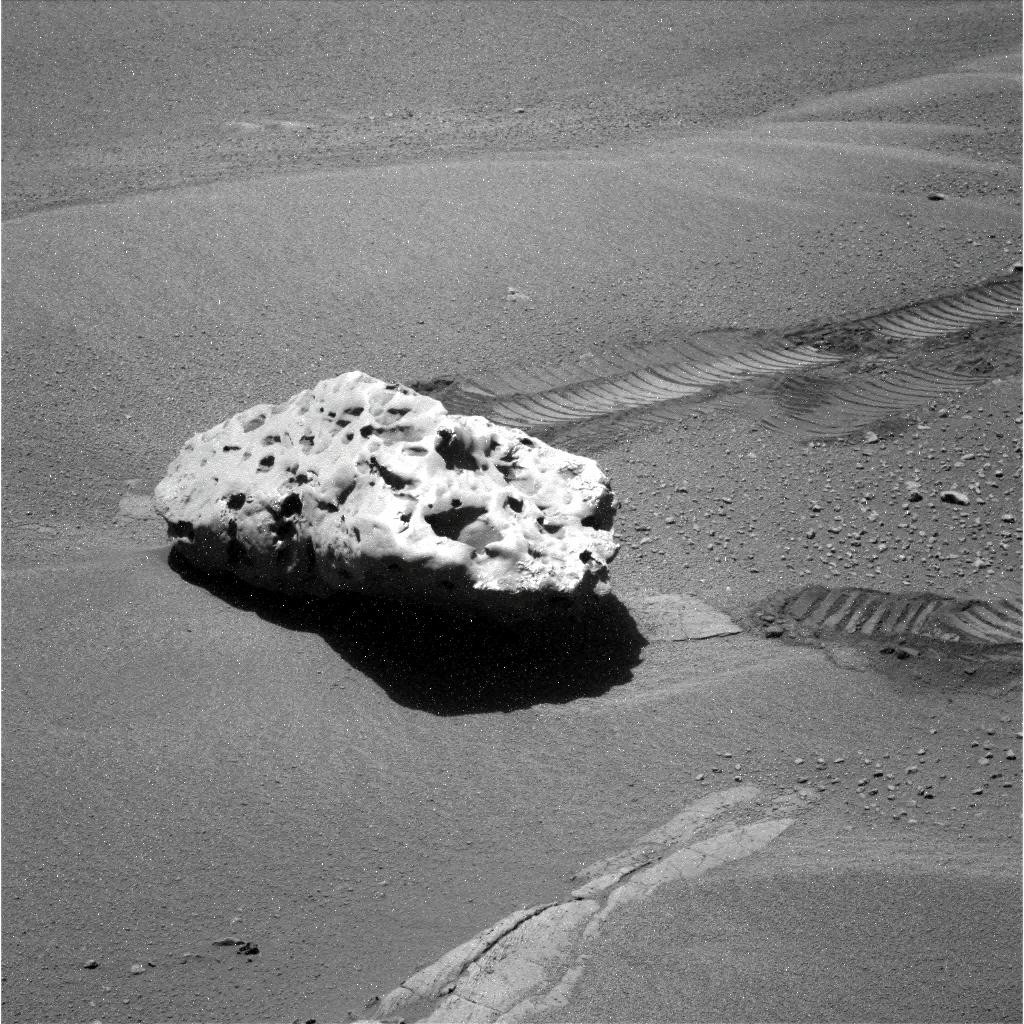 Sol 2,000, tracks left by MER B Opportunity during the drive to the other side of Block Island Meteorite. 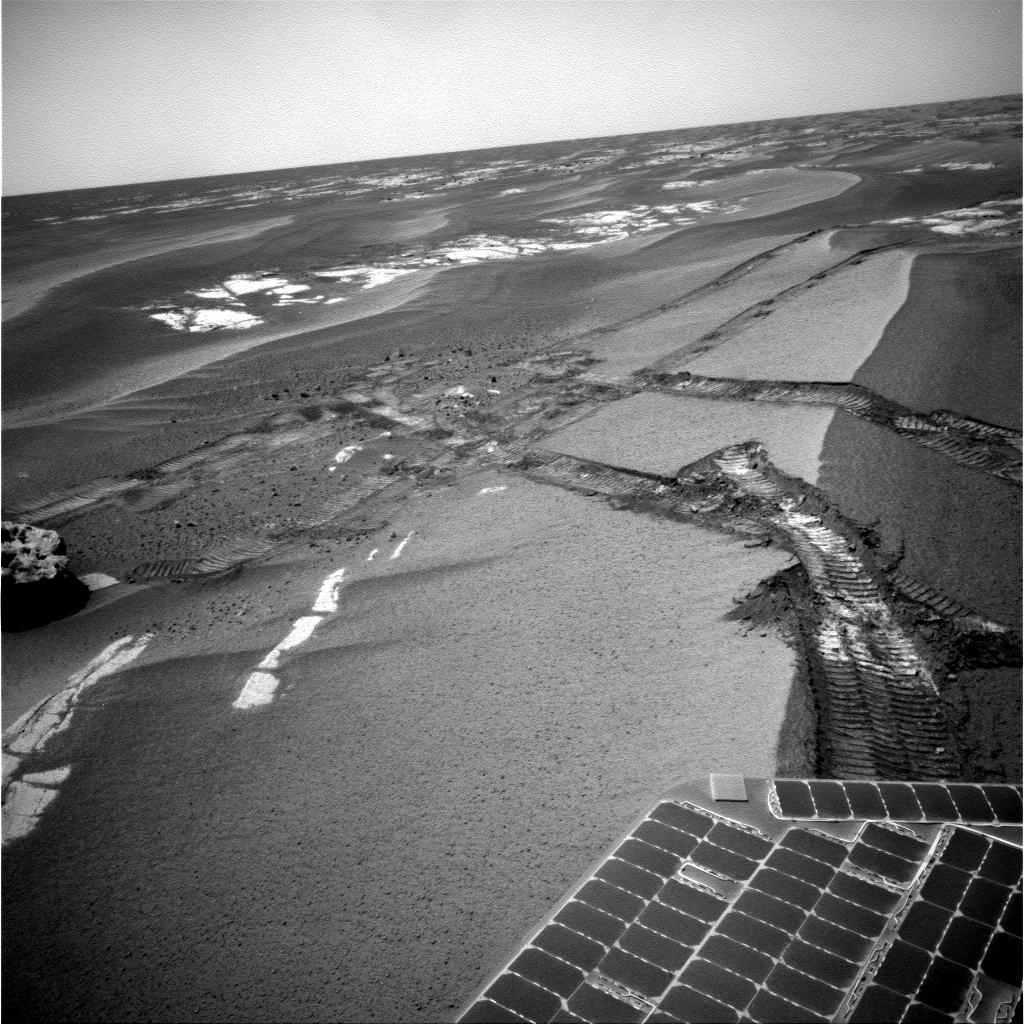 MER B Opportunity spent Sol 2,001 driving around Block Island Meteorite, to enable imaging of the metallic meteorite in its entirety. 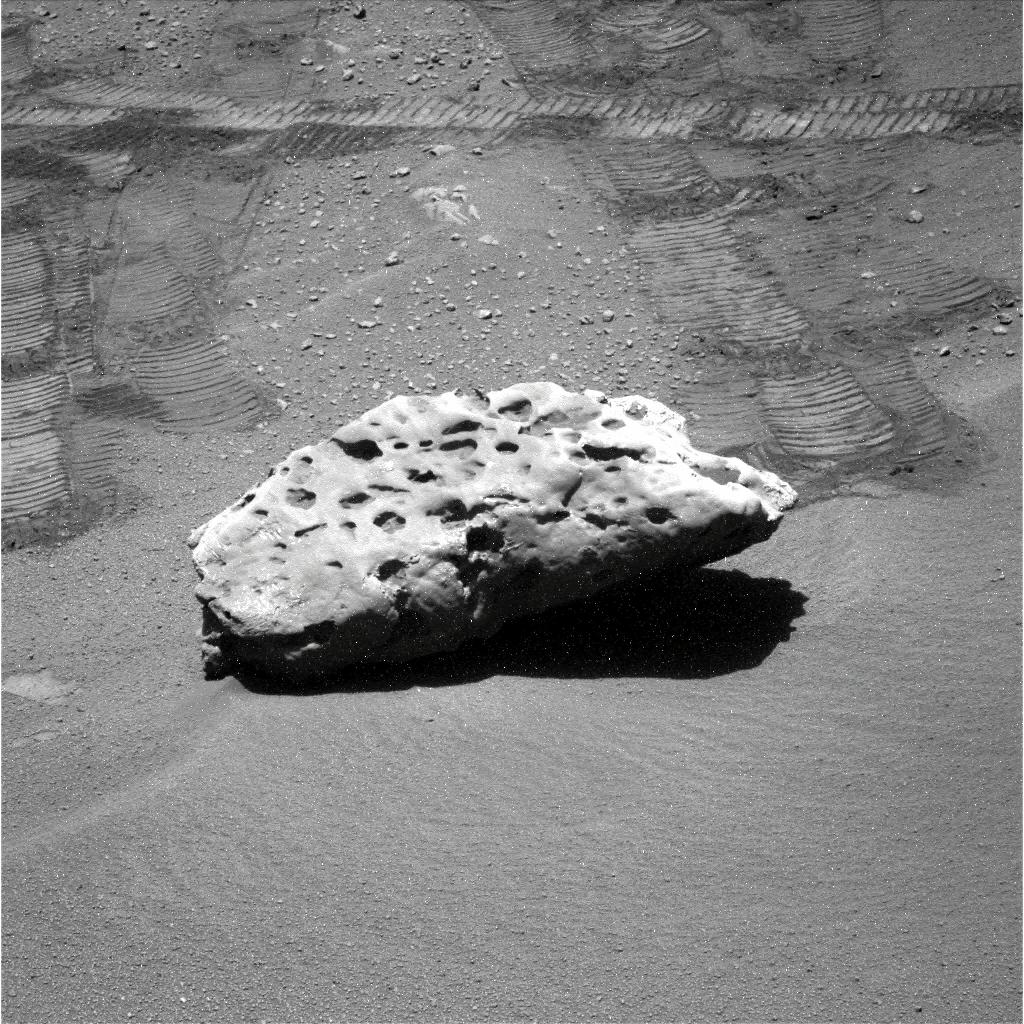 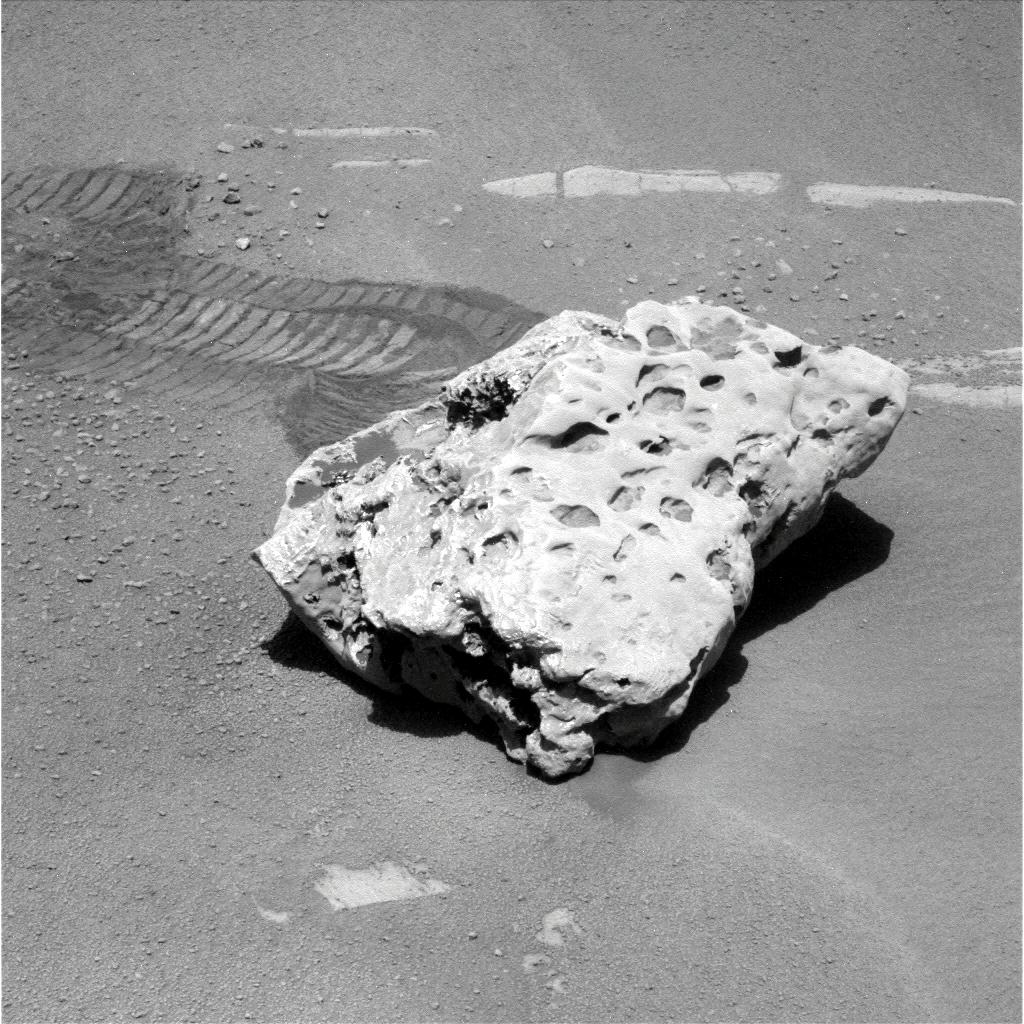 Sol 2,002. MER B continues the circle around Block Island Meteorite. This is to asertain the exact shape & form of the iron meteorite & if the pitting, etc is evenly distributed or not. This can't be a coincidence... Oppy has found another meteorite. It's not on the NASA Rover site yet, but Emily Lakdawalla of the Planetary Society is on the ball as usual:

MeteorWayne":1pno1zkv said:
This can't be a coincidence... Oppy has found another meteorite.
Click to expand...

Coincidentally ( ) Spirit has also seen, but not closely investigated, apparent meteorites. Maybe most of Mars is a great place to hunt for meteorites.
M

That's an interesting question, I'll have to do a little research. Both of the martian (in fact all 3 IIRC) meteorites are fairly large irons. I don't believe many of them have been recovered from the Antarctic. But I'll look into that.

The complete Antarctic list of the US collection is available here: (2.1 MB Excel xls worksheet)

I haven't been able to find other country's lists so far.

Interesting. I was looking at Antarctica as a gathering place for meteors in general, not thinking of specific types. I guess erosion over a billion plus years will concentrate the percentage of irons found on Mars. Maybe that's the main difference in comparing Meridiani and Antarctica as spots for meteor hunting: In Meridiani we are seeing meteors gathered over perhaps billions of years while in the Antarctic, we are seeing meteors that fell much more recently. I don't know, maybe just within a few years.
M

It may just be that irons are too dark and dense to "float" on top of the ice. They are dark, so absorb sunlight, and the densest of all meteoroite (7-8 g/ccm) and may just sink out of site. All other meteorite classes are 2-4 g/ccm; even the stony irons are only 4-5.

To get back on topic

MeteorWayne":2gw6itvt said:
To get back on topic

I would think there would be a lot of debris and half a mile is not all that far, I would think orbital assets could get pretty good pictures in that particular area. If there's not a visible crater then it exploded in the atmosphere and could have left a long trail.
C

scottb50":2iliy4li said:
...If there's not a visible crater then it exploded in the atmosphere and could have left a long trail.
Click to expand...

Do iron meteors explode? Or do they tend to remain the solid lump of metal that they are?
S

Do iron meteors explode? Or do they tend to remain the solid lump of metal that they are?[/quote]

scottb50":137rsdfx said:
Do iron meteors explode? Or do they tend to remain the solid lump of metal that they are?
Click to expand...

Well, they can and do in earth's atmosphere...for example the iron that created Meteor Crater in Arizona was basically pulverized. Of course, Mars' atmosphere was probably thinner.

Just based on appearence, I'd suspect these (if related) did not split in the atmosphere; I'd expect more angularity. Perhaps they were pieces in space on common orbits? It's pure speculation.

It should be interesting to see how closely related they are once the instruments have spent some time examining them.
It would be quite serendipitous, and might give us interesting data about the atmosphere at an earlier time in Martian history.