Time to get to Mars

If Space X developed a rocket in the future with an Acceleration of 10 Metres per second how long would it take to get to Mars?
Roberto

Are you wanting to slow down again before you reach Mars, or just whizzz by at the maximum speed attainable? I assume you will allow practical limitations like the speed of your vehicle unless you are happy to reach c. You might be, but the laws of Nature might not.
It is not as simple as starting at 10 m/sec which, by the way is a speed. I assume you mean an acceleration of 10 m/sec/sec (10 metres per second per second).
You travel 10 m in the first s, 20 m in the second s, total 30 m travelled after 2 seconds and keep adding as you go along.
Of course if you are happy for someone to follow this simplistic itinerary the calculation is possible. But who wants to do this until they know what scenario you wish to follow. Then are we to assume you want the shortest distance or the minimum fuel, bearing in mind you will have an increased fuel load? Your proposed scenario is very wasteful on fuel and requires a similar amount of fuel to slow down again. For example you could stop firing after several seconds and cruise = taking longer but using less fuel.
Then again we are ignoring other factors like gravity assists (if relevant).
I am not a mathematician (any around please help) but you will need to stipulate a scenario. Just getting to Mars in the shortest time totally irrespective of any other consideration can (IMHO) serve no useful purpose whatsoever.
Please fill in some blanks . . . . . . . . . . . .
Reactions: dfjchem721

Sum of first n natural numbers is n(n+1)/2
where n is the number of seconds = time taken.
What we want is this equal to the distance to Mars as 10 x the above - yes?

Wiki gives:
The minimum distance from the Earth to Mars is about 33.9 million miles (54.6 million kilometers). However, that doesn't happen very often.. Illustration of the orbits of Mars and Earth around the sun during Close Approach. . . . . . . see reference

Any mathematicians please be gentle in correcting me!

So Roberto there is an answer. It would take you approx. 7 days and 2 hours approx.
I have not checked to see if c is exceeded.

But this is (subject to solution of quadratic equation) not stopping - just zooming by at a zillion metres per second (not a real zillion) it would take 170.22 hours to reach Mars and zoom on by = and NO I am not going to calculate the time to alpha Centauri, exceeding c being allowed!
Last edited: Jun 6, 2020
Reactions: dfjchem721

You wouldn’t have to zoom by you could go on a SPLAT trajectory! Seriously I wish my math was good enough to help you.
R

Hello Lovethrust,
firstly apologies for my incomplete question and recognise that I meant metres/second/second acceleration. Secondly my enquiry should have been more specific and I take time to explain more fully.
I find it disappointing that currently the time taken for landing on Mars can take 6-7 months each way with current rocket technology. That is far too long for any humans to be subjected to. I am thinking and hoping that in the future there must be a far more efficient model of propulsion other than chemical rockets such as nuclear, magnetic or use of sun plasma forces giving the rocket thrust for much longer periods.
The reason I picked 30 metres per second is that it approximates 1G enabling humans on board to experience normal gravity sensation. At the half way point the rocket would do a 360 degree turn and the thrust would be in the opposite direction providing both a slowing effect with 1G effect. I would anticipate that this type of rocket would stationed in a planetary orbit being replenished with foods, equipment, stores etc and astronauts and be used primarily to go the distance to mars.
In these circumstances would you be able to tell me how long it would take to go to Mars
Roberto
Reactions: Lovethrust
R

The above question is also aimed at Catastrophe. Thank you for providing the maths involved, unfortunately the subject is not my best of subjects!
Roberto

Hi Roberto,
Remember astronauts have been doing year long stints on the ISS for awhile with little ill effect. Now they are somewhat protected from radiation that a crew heading to Mars wouldn’t have but they are working on that as well.
But you are right, using current technology is a dead end, at least going past Mars. We will eventually, hopefully sooner than later, nuclear engines which will shorten the trips to a handful of weeks. This will open up manned trips to the outer planets. Unfortunately the will (and money) just don’t seem to be there yet.
As for constant 1g acceleration that is WAY beyond our technology right now. But if you could it would take you a mere 3 1/2 hours to get to the moon (if you wanted to stop), you would get to Mars in under three days! A couple of days more If you wanted to stop. The outer solar system could be reached in just a few days more. In fact if you kept going in about two and a half years you would reach 99% of the speed of light!!! 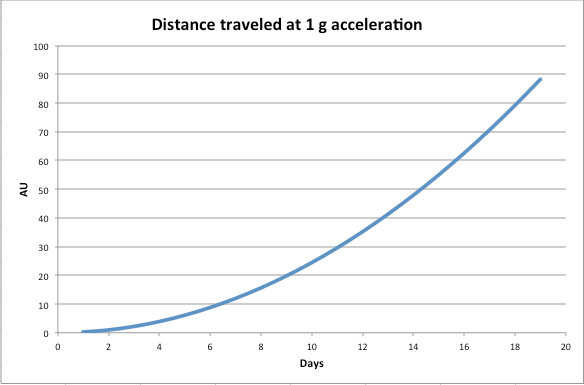 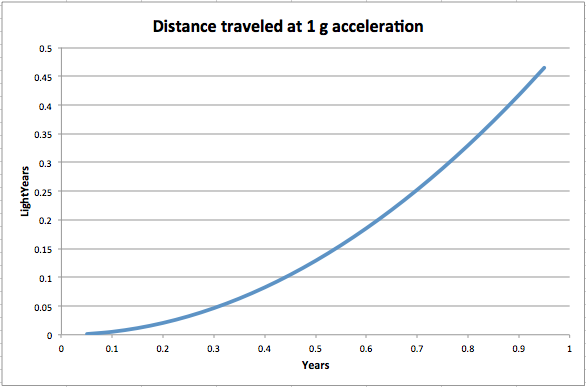 As you see like compound interest it really adds up! But alas the energy requirements for constant 1g acceleration are just too tremendous to even contemplate how they could be achieved, about the only thing I think could do it perhaps would be a ramjet or a matter-antimatter drive with the ship creating it’s own antimatter as it went along.
So right now it looks like the best we can do is to go nuclear and trim it down to weeks instead of months. Hope this answered your question (I had to take the math and illustrations from much smarter people at the stack exchange LOL!).

Roberto said:
The above question is also aimed at Catastrophe. Thank you for providing the maths involved, unfortunately the subject is not my best of subjects!
Roberto
Click to expand...

It is approximately 36 million miles to Mars at closest approach, which happens only once every twenty-six months. For your question, you need not the distance to Mars, but the distance half way to Mars. That's the distance you need to accelerate before you begin your deceleration. You specified ten meters per second That is a reasonable approximation to the 9.8 meters per second squared we experience on Earth.
So half of 36 Million Miles is 18 Million Miles. At 1.6 Kilometers per mile that is 29 Million Kilometers more or less. But we are dealing with meters, not Kilometers, so multiply the 29 Million by a thousand, so it's 29 Billion Meters to Mars at it's best. Worst is around seven times that.

The formula for time at a constant acceleration over some distance is T = square root of ( X/A) where T is time, X is distance and A is the constant acceleration. This gives a time of approximately T = 53,851 Seconds. At 3,600 Seconds per hour, that leaves you with a time of approximately fifteen hours. You then need another fifteen hours to 'stop'.

This isn't really accurate however. It assumes that the target and launch point are not moving and that there is no force of gravity overall. None of those are true.
The actual numbers can get quite messy.

During your entire trip, you are fighting the Suns gravity also, so you don't actually have that nice 1 G for the actual trip. Gravity falls off as the square of the distance from the object. So the Sun's gravity is going down the entire trip, but not by that much. At Mars, it's approximately half of what it is for the Earth.

For a rocket, it's quite hard to keep up a 1 G acceleration too. The rocket motor produces a thrust that is pretty much constant. But the acceleration is the thrust divided by the weight of the rocket at any given second.

That's rocket, cargo (that's you!) and fuel. Early in the trip, most of the weight is fuel.

For the trip you propose, it's an awful lot of fuel. The Space Shuttle burned roughly ten times the weight of the Shuttle in fuel. That was for roughly five minutes at three G's.

For the trip you propose, it would take more fuel that the United States has for this single trip. 7/8's or more of that would be burned just getting into Earth Orbit too.

This is why we use the boost and coast system to get there. It's a long curve to Mars, not a straight line. For the 1G constant you proposed, it would still be a curve, but barely.

And yes, Catastrophe is quite correct. A round trip would take less than a week. But it would use more fuel that the entire world has available at any one time.

I hope this helps. It's as i said not really accurate. to get real numbers, you have to use partial differential equations and several numbers from Astronomy as well. There are astronomers who do this kind of thing often. They will say that I am quite inaccurate. They will be right too. I never even mentioned the influence of the other planets for instance, and totally left out the difference between speed and velocity.

Velocity is speed in a particular direction. It does no good to match speeds with Mars if you have a different velocity.

Oh, and by the way, if we could travel with the drive you mentioned, we wouldn't be going to Mars. Such a thing would make the propulsion system for a starship. Why visit dry and dusty Mars when it could be Alpha Centuri or Tau Ceti? At 1 G it only takes a year to reach the speed of light, or so close to it that you'd need laboratory instruments to tell the difference. So at your 1 G, you are just two years away from anywhere in the Universe.
R

Thank you Bob for your explanation. A lot more complicated than I ever imagined. I just want us (humans) to get to Mars a lot quicker than the current timeframe of 6-7 months.
Roberto
You must log in or register to reply here.
Share:
Facebook Twitter Reddit Pinterest Tumblr WhatsApp Email Link