What is VY Canis Majoris? 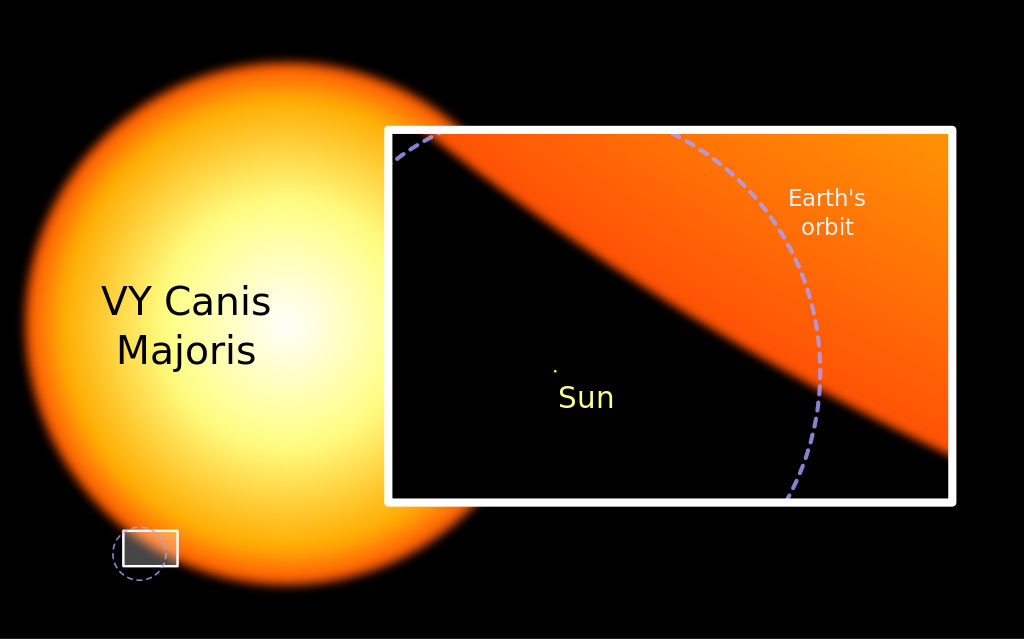 There are many classes of stars, from the red, white, and brown dwarfs to the red giants and blue supergiants. As far as stars go, ours is pretty average. It’s not small, but it doesn’t rank among the supergiants either. There are some stars out there that are impressively huge, though. They go beyond the supergiant territory and are almost incomprehensibly massive. VY Canis Majoris is one such star.

1. It’s not a supergiant. It’s a hypergiant.
VY Canis Majoris is in a class all on its own. As a hypergiant, it is 2000 times the size of our Sun. To give you an idea of scale, if it were in our solar system, it would extend all the way out to the orbit of Saturn. It also has about 30-40 times more mass than our Sun. 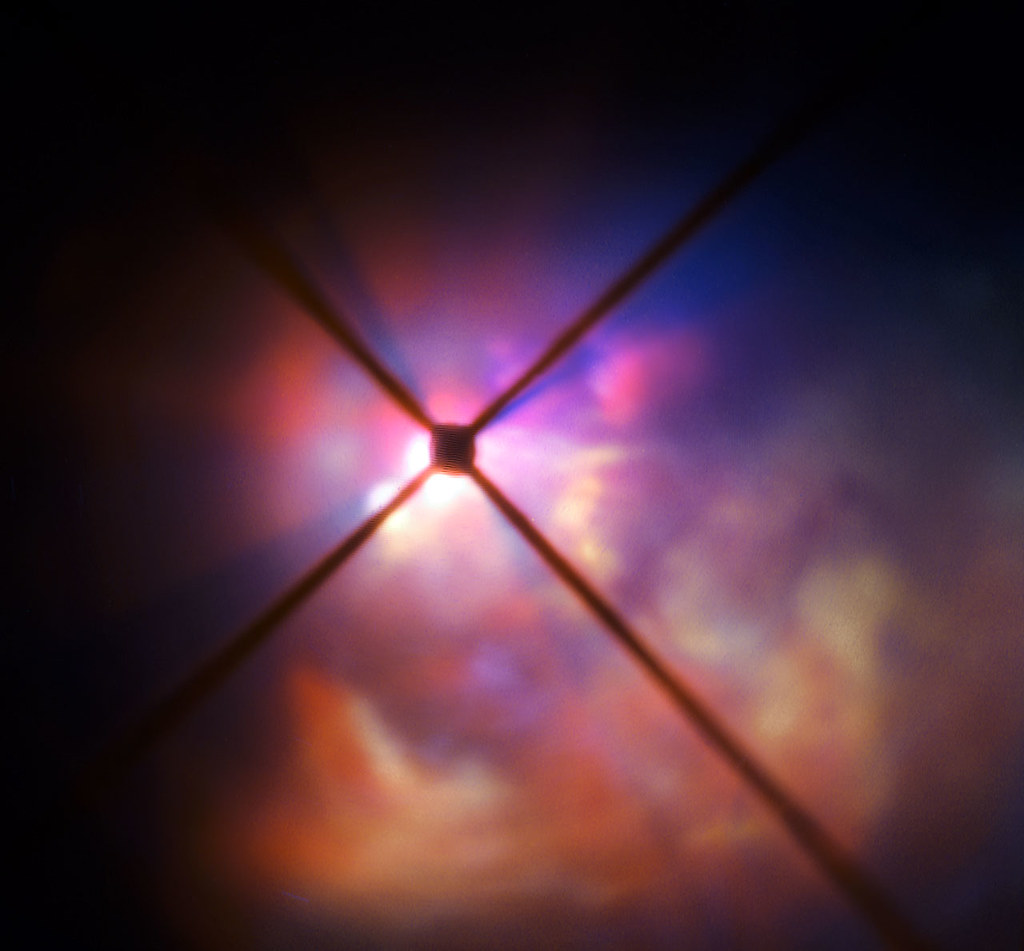 2. It’s probably nearing the end of its life.
When stars are as huge as VY Canis Majoris is, they don’t live very long. The reason is because they’re running through their fuel much more quickly than smaller stars, so rather than burning for billions of years like our Sun they only last millions. Images from Hubble have shown that the giant star is shooting off material, indicating it’s getting ready to die. 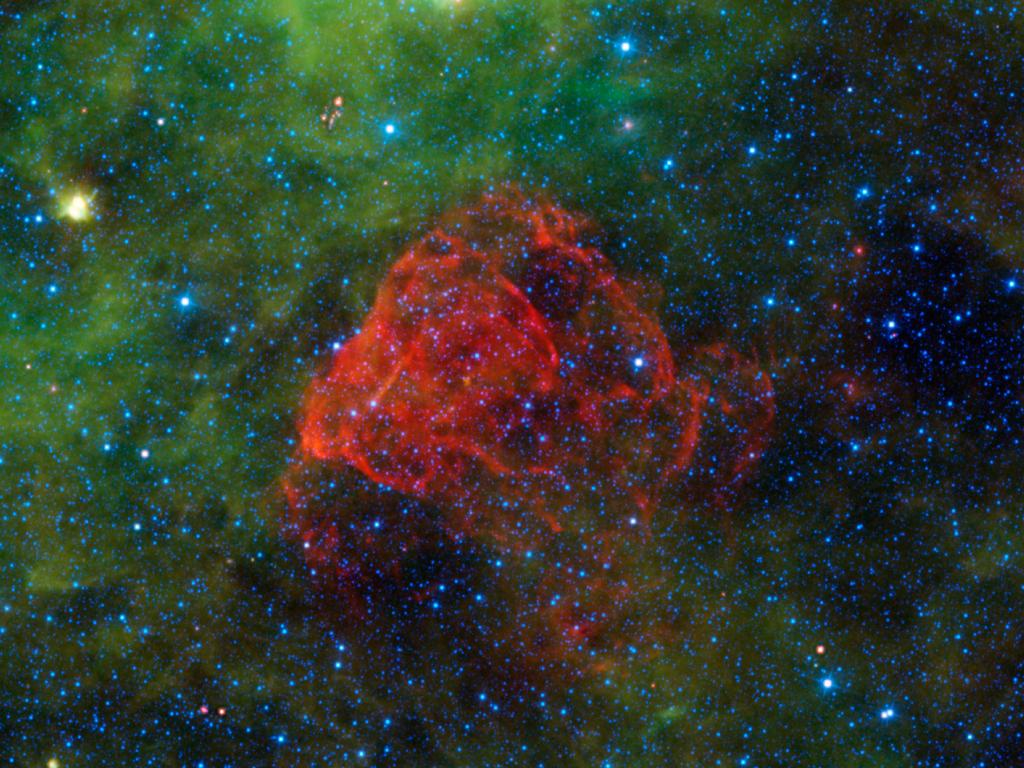 3. Stars like VY Canis Majoris contribute complex molecules when they die.
When giant stars that can create heavier elements die, they send those heavier elements off into the universe, and those elements then form more stars and other celestial bodies - such as planets. And people. You’ve probably heard the quote, “We are all made of star stuff,” and it’s entirely true.

2000 solar radii and 40 solar masses shows a mean density some 7E-9 g cm^-3 and surface gravity 9.99E-6 where the Sun = 1.0. As the report indicates the star is losing mass and the very low surface gravity lets the stuff go off into space

Isn't it funny how VY is in the constellation called "Big Dog" (Canis Majoris)?

Yep, we are made of star stuff, but how does sugar and spice manage to come together so nicely?

Oh, FWIW. The Sun has not the least bit of tint of yellow seen in its disk, even at the limb. Yellow was a way to group the Sun with Capella and other stars similar in spectrums (Rutherford, Secchi, and others). It is also the color we see when it nears the horizon thanks solely to atmospheric extinctions. [My avatar is a true color image taken at the McMath-Pierce solar observatory at Kitt Peak and it is unfiltered.]
Reactions: Catastrophe

I don't want to ask this question in fear of sounding silly but will VY Canis Majoris definitely turn into a Black Hole once it goes Hypernova, or, is there a chance it would be too violent to create one?

''it takes over 8 HOURS for photons to travel from one side of the star to the other.'' 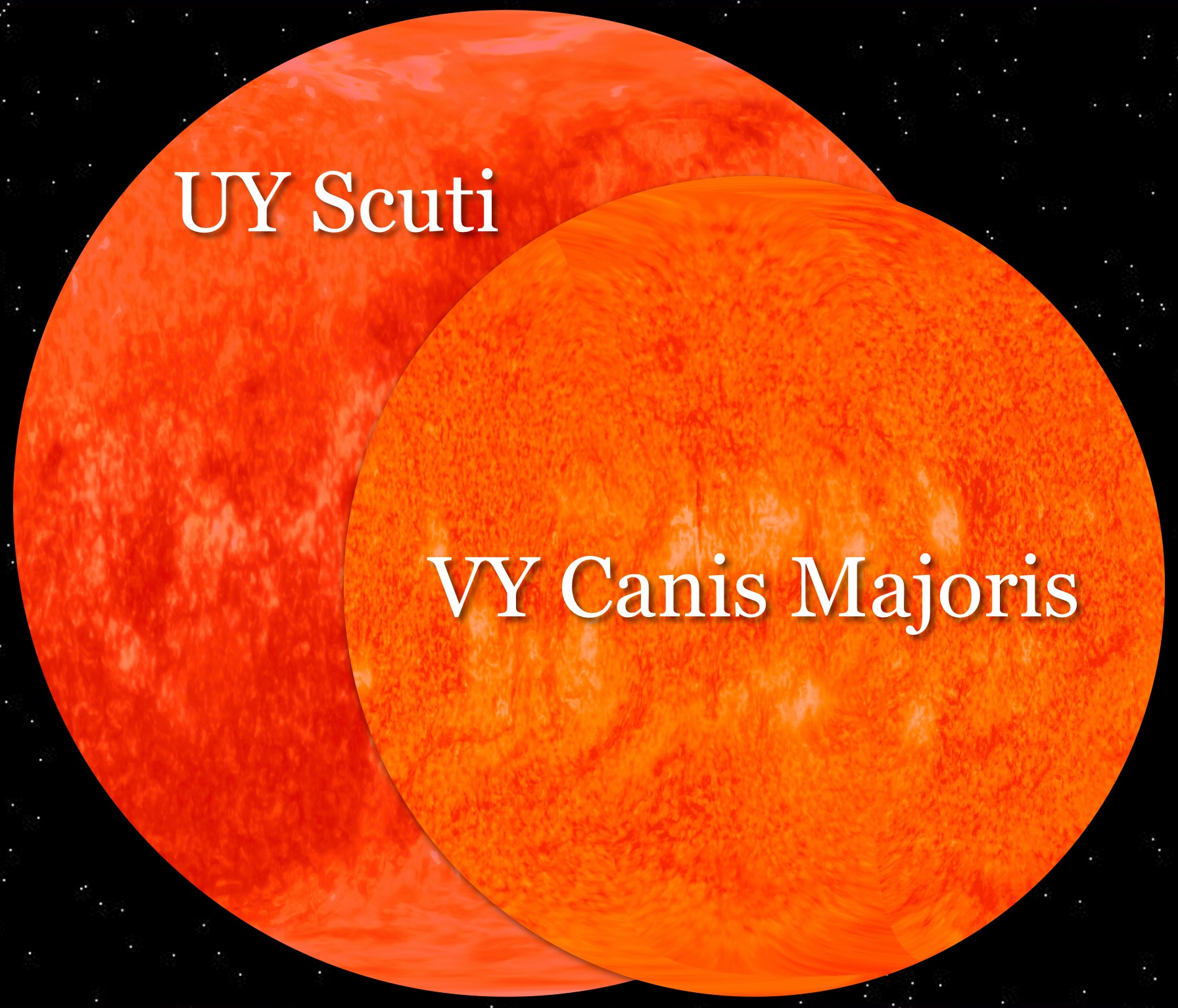 Helio said:
Isn't it funny how VY is in the constellation called "Big Dog" (Canis Majoris)?

Yep, we are made of star stuff, but how does sugar and spice manage to come together so nicely?
Click to expand...

"Yep, we are made of star stuff, but how does sugar and spice manage to come together so nicely? "

Because only smaller parts (simpler molecules) are there at the time? Or are we back to anthropomorphism, and the actual substances would actually 'like' each other?

ClassicFlappy said:
I don't want to ask this question in fear of sounding silly but will VY Canis Majoris definitely turn into a Black Hole once it goes Hypernova, or, is there a chance it would be too violent to create one?
Click to expand...

That's a great question. You may want to ask this in the AMA thread. I think there has been recent work that suggests annihilation is possible for stars that we would have assumed to produce a black hole.

''it takes over 8 HOURS for photons to travel from one side of the star to the other.''
Click to expand...

Using 1.5 billion miles in diameter, it would take ~2.2 hours. But light traveling through the star actually takes thousands of years (Random Walk).
Reactions: ClassicFlappy and Catastrophe

FYI here. I find it common in astronomy reports that the r-process and s-process, explains why carbon is in our bodies as an example. However, this is not a clean bill submitted to the President for signing by Congress My observation, a new report by astronomy.com indicates that the explanation for the origin of carbon found on Earth and in our bodies, is not easy to explain using the r-process or s-process. “Understanding of the processes by which elements heavier than hydrogen and helium are dispersed to either a star’s immediate environment or to the wider universe — rather than being trapped in dense remnant cores — is still limited,” Jeffery Cummings, an associate research scientist at John Hopkins and co-author of the study, tells Astronomy...However, one thing is for sure, there is still much to learn about low-mass stars and their evolution, as well as the role they play in the chemical enrichment of their host galaxies. Cummings says astronomers need to intensely study stars ranging from about one to two times the mass of the Sun, as well as the white dwarf remnants they leave behind.”, Small stars are vital to dispersing the building blocks of life, https://astronomy.com/news/2020/08/small-stars-are-vital-to-dispersing-the-building-blocks-of-life
Reactions: Helio and Catastrophe

We have come a long way since Hoyle (late 50's) was able to calculate how a double resonance could allow three He atoms to merge given two (that form Be) would decay in less than a trillionth of a second. Truly remarkable!

Hoyle, et. al., used his discovery to help their Steady State Theory oppose the Big Bang Theory, which he coined as a pejorative. His nucleosynthesis, however, greatly helped the BBT. [It is still strange to try and understand why Hoyle had to watch the physicist who ran his test get the Nobel Prize without him.]
You must log in or register to reply here.
Share:
Facebook Twitter Reddit Pinterest Tumblr WhatsApp Email Link