Hi guys.
I was checking out the LROC Lunar map. It appears to me that 99% of the impact craters seem to be random. They appear to be some object hurling through space and the moon randomly got in the way.

On the back side, there seems to be parallel streaks of craters. They are pretty close to the same size as each other. Here

These are parallel to the ones above.
There are more nearby too that appear older.
These are also parallel to both above.

Worth looking into further?? Gotta admit it's kinda strange 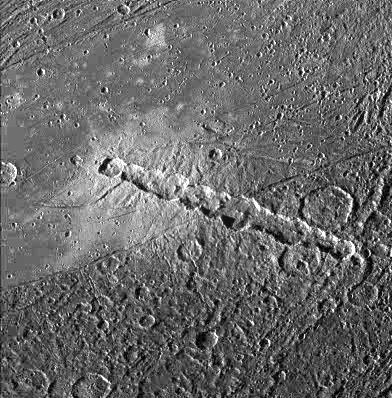 This is a very interesting phenomenon. Maybe it really was a series of collisions of celestial bodies. Or maybe a photomontage. I am not an expert, I cannot say anything about the authenticity of these pictures.

I'd call them authentic since I provided links to the source data at LROC. All the info I find on these has 3rd grade level description. While all these causes seem reasonable and likely, what strikes me is ..

1. They are not in our view from earth.
2. Close to same size impact.
3. Alignment of parallel patterns.

I don't agree with some of the possibilities of how they got there. I'll have to express my thoughts on it later on today.

I suspect there are similar scars on Earth and other heavenly bodies. They are interesting.
Reactions: Lutfij

The streaked craters are the result of asteroids having both a glancing angle and a very high velocity.

These streaked impact craters are likely the result of interstellar asteroids traveling (100-500 kms) and impacting nearly horizontal to the lunar surface.

Local asteroids tend to be below 60 kilometers per second (usually around 20-25 kms) and they (a guess) cannot hit at an angle less than 30 degrees from the horizontal. This tends to excavate a relatively round hole even at this angle.

Write an article on interstellar asteroid impacts and submit it to Nature.

Change your name to Posthumous

. Scientific papers on interstellar impacts are missing from the scientific literature because the author’s name is always Posthumous.
K

You would think with the amount of tax dollars they spend, they could at least give us color photos of the moon.

KenM said:
You would think with the amount of tax dollars they spend, they could at least give us color photos of the moon.
Click to expand...

When I look at the moon with my telescope, color wouldn't help. Definitely a "grayscale" landscape for the most part.

The likely explanation can be found by looking at the Roche limit for those objects with crater chains. This is the distance between objects where a smaller body, say a comet, gets closer and closer whereupon the tidal stress by the massive primary object (Moon) is enough to rip the comet apart. Thus a string of objects (debris chunks) form in roughly a straight line before impacting the surface.

This, surprisingly, has been observed. Here is a comet that broke-up, formed a string of objects, then impacted and bruised Jupiter...
Shoemaker-Levy 9

The equation for the Roche limit (distance at the point of breakup) is fairly simple. But there is more than one Roche limit. The first is a fluid limit where the simplest example is one where the object is a fluid, thus easier to break apart and would have the farthest Roche limit. But objects aren't fluids and their internal tensile strength must be taken into account. The greater its internal strength, the closer it can get to the larger mass before becoming torn by the tidal stress. Recall that tidal stress is an inverse cube of the distance relation, so a little change in distance makes a big change in stress.

Phobos, moon of Mars, is nearing the fluid Roche limit, but it likely has another 10 million years before the tidal stress gets the best of it.
Last edited: Dec 30, 2020
Reactions: Catastrophe and rod

I would think that if an object broke apart then to leave marks that close to each other, the distance it broke wouldn't be too far from where it impacted.

Since the Moon isn’t massive, its Roche limit will be near the surface, so separation of the broken parts will be minimal

COLGeek said:
I suspect there are similar scars on Earth and other heavenly bodies. They are interesting.
Click to expand...

Here is list from Wiki. A crater chain is called a catena, as I have just learned.

They are like a cantina ,with people lined-up along the bar, perhaps. Each potentially cratering with enough drinks.

Here are images of a number of catenas on Mercury.

yeah it seems mysterious or may be one of the possibility where continuously one after the other meteors hit the same spot during meteor shower.
its universe what else can we expect it full of vivid possibilites out there
You must log in or register to reply here.
Share:
Facebook Twitter Reddit Pinterest Tumblr WhatsApp Email Link