As Comet ATLAS crumbles away, Comet SWAN arrives to take its place for skywatchers

Comet ATLAS, which was predicted to be the first bright naked-eye comet in a decade, turned out to be a flop. Now another newly discovered comet is poised to steal the spotlight.

As Comet ATLAS crumbles away, Comet SWAN arrives to take its place for skywatchers : Read more
Reactions: HillBilly and rod

The report states "A prehistoric visitor The new comet appears to be traveling in a very elongated ellipse. For fun, I fed its orbital elements, which includes the eccentricity of its path around the sun, into an orbital simulator. My simulation suggests Comet SWAN is traveling around the sun in a period of about 25 million years. This means that the last time it swept through the inner solar system may have been during the Oligocene Epoch, when Paraceratherium, a genus of hornless rhinoceros and one of the largest terrestrial mammals, was walking the Earth."

A comet with possible orbital period of 25 million years that modern telescopes are seeing today since the days of Galileo, you cannot say if this comet completed multiple perihelion passages and survived an unknown mass loss rate too. This may be the comet's *first* perihelion
Reactions: HillBilly, dfjchem721 and Lovethrust 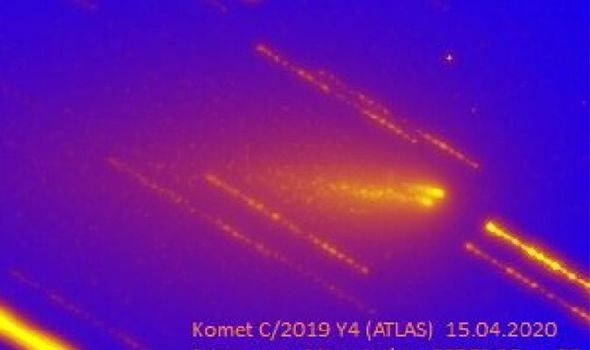 And are you aware of any comets with a period estimated to be longer than 25 my?
Reactions: rod
H

Hi, first post : )
I tend to agree with rod as it seems to me the chances some of these recent comets may be the result of some perturbation cause in the outer reaches of our system . Can explain the lack of cohesion too . But many possible explanations and looking forward to what we learn.
Reactions: rod

8 comets in 16 years? Perhaps it's time to remove the "amateur" label from Mr. Mattiazzo's description!!
Reactions: Lovethrust, HillBilly and rod

And are you aware of any comets with a period estimated to be longer than 25 my?
Click to expand...

dfjchem721, the space.com author came up with the 25 million years orbital period in the article. I punched some numbers into my trusty astro spreadsheet and found using e =0.99999 and a=85,000 AU (similar to Oort Cloud where a = 1E+5), you could in theory see a comet with a period some 24.78E+6 million years. I used a comet mass near that of Halley, 1E+17 to 1E+18 g. The average, unperturbed orbital velocity could be 0.066601 km/s. However, others in this discussion pointed out issues with such comet orbit extrapolations. Using a period of 24.78E+6 years, 1E+9 year time span, the comet could complete more than 40 perihelion passages. There is nothing in astronomy that confirms orbits like this or many perihelion passages over a one billion years time span. I use Jean Meeus algorithms for elliptical orbits in the solar system.
Reactions: dfjchem721

Sorry, missed your quote marks. Thought you had done that calculation and did not remember it from reading the article hours earlier.

Happy to read that "nothing in astronomy that confirms orbits like this or many perihelion passages over a one billion years time span."

It at least questions whether such periods are a tad too long to be real.

But if it is that long, think how lucky you are to be seeing SWAN . A once in a 25 million year chance!
J

I hope SWAN doesn't turn out to be an ugly duckling, I really want to see another bright comet visible from the northern hemisphere with a long bright tale, maybe in the daylight too.
Reactions: Lovethrust and Catastrophe
You must log in or register to reply here.
Share:
Facebook Twitter Reddit Pinterest Tumblr WhatsApp Email Link