billslugg said:
It says they could have a greenhouse effect.
Click to expand...

Yep. Here is a 2014 paper that gets into the greenhouse weeds, though their 2013 paper was more extensive, yet it was improved by the 2014 model.

In another thread, Pale blue dot thread, the catalog presented from another paper, here, presents an extensive list of exoplanets in the HZs (both OHZ and CHZ). The OHZ is the Optimistic zone that extends to an Early Venus position to allow consideration of exoplanets that may have once had liquid water, I think. It also extends to a Mars for the outer OHZ.

This broadens the HZ, of course, so more exoplanets will be found.

One area I would like explanation is that the list is based on extensive formulations done in 2014 where the Early Venus and the Mars parameters were limited to a mass of 1 Earth. The coefficients vary as mass changes, and the list includes very massive objects that would seem to me, at least, not be ones that could be used for those limited formulations.

With that in mind, I elected to simply adjust (fudge) the inner and outer zones a little but limit the exoplanet mass to under 13 Earth masses. As noted in a prior post, I also tweaked their 2017 Radius => Mass equation to fit today's better data. This is important since their HZ formulae require both radius and mass. I could extend the list to the more Jupiter-like exoplanets, as they did, but I don't have reliable coefficients, nor do I think there is great hope for an Earth-like Jupiter-mass exoplanets to be found, for that matter.]

Notice that their method produces only 4 HZ exoplanets with reasonable masses.

Here is a current list of HZ exoplanets using the three other methods that I'm aware:

Earth's over population is solved!

There is a new exoplanet on the main list... K2-413 c. It is close to the size of the Earth, but it does orbit an M-class star. [The "main list" is comprised of three different popular methods for determining the HZ for any given star system.]

This program finds 116 in their HZs, with 11 that are about the size of Earth.

There is a more sophisticated method for calculating the HZ, as mentioned earlier. I can't say if it is actually more reliable in predicting HZ planets, but I hope to be able to present all reasonable models for everyone's consideration. Better telescopes, especially the JWST, should tweak these models.

Notice how there are now more Earth-sized exos in this model than shown before. This is a corrected model. I found an incorrect mass multiplier in my program, which is now corrected.

The green highlight are the exoplanets about the size of Earth.

Just an update. No changes in the Kopparapu et. al. model. (see prior post).

Using other methods, there is one new exoplanet (117 total in the HZ of the current 5292 exoplanets discovered). No new HZ exos that are Earth-sized.

Here is the summary:

Helio, the results and data are very interesting. I would be interested in going through and using some of this data on my website and of course if I do I would credit you for anything I use.

Being an avid astrophotgrapher I wonder if exoplanets are completely beyond my reach in photographic terms. I think so.

karlp295 said:
Helio, the results and data are very interesting. I would be interested in going through and using some of this data on my website and of course if I do I would credit you for anything I use.
Click to expand...

There is no need to credit me for my use of the free exoplanet catalogs. If you have Excel, I can send you my programs (vba), which allows you to adjust variables such as planet size. Just send me your email in my private message.

Being an avid astrophotgrapher I wonder if exoplanets are completely beyond my reach in photographic terms. I think so.
Click to expand...

They are too far awayand too small for even most large scopes.

At least one possible amateur endeavor exists. The new scopes, like the JWST, can tickle the exoplanet spectrum out of the star’s spectrum. This exo spectrum will reveal the exo’s color if someone were to go to the trouble to use it. I invented a device (asterochromograph) that takes a reference white light and adjust its spectrum to the given exo’s spectrum by using a prism and a mask. I never completed building it as there was very little data at the time, and not much interest in it back then.

The color of exo’s change with their rotation. This would reveal a water world to have continents, like Earth.

Here's your update. There have been less frequent updates because of the lack of new Earth-sized planets in their HZ.

Here is the other listing that comes from the more recent work that involves the importance of mass and atmospheres. [see here]

Notice how the two lists don't always match, including TOI-700 d, which didn't make this list. 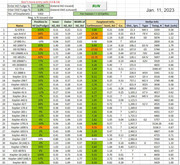 There is no increase in exoplanets in the HZ using the other three methods, however, the atmospheric method does have an increase in number. 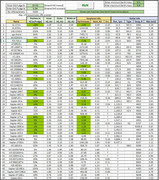