“It’s a great day to be a particle physicist,” said CERN Director General Rolf Heuer. “A lot of people have waited a long time for this moment, but their patience and dedication is starting to pay dividends.”
Click to expand...

Congradulations to them! And what an exciting time we live in.


I wonder what the next ramp up will 14 TeV after the next shutdown period?
C


neuvik":13onb7ro said:
...Congradulations to them! And what an exciting time we live in.
Click to expand...

Until now, the 56-year-old center near Geneva on the borders of France and Switzerland with a 10 billion Swiss franc ($8.7 billion) annual budget has admitted only European states as full members, although many others take part in its work.

"This is a giant leap for particle physics that recognizes the increasing globalization of the field," said Michel Spiro, president of CERN's ruling council, which made the decision at the weekend.

Rolf Heuer, director-general of the body whose scientists have won a raft of Nobel prizes and where the World Wide Web was invented in 1989, said the change reflected global interest in research into the birth of the universe.

The change will not necessarily mean more money coming into CERN, whose budget is fixed for five years and then shared among its members, according to spokesman James Gillies.

But it will mean that there is a potential source of extra revenue for the organization, which critics say swallows huge funds that could be used for more practical purposes.
Click to expand...

OK, I go to the CERN website and look for news and read stuff that really makes no sonse to me. So has any significant progress toward the stated goals been made? Have they created or seen any new particles? Or is it just a big money pit.
M

This isn't fast science. It takes billions of collisions to collect enough data to even begin analysis when you are looking for new things.
E

You can listen to some of those.

Take that, Fermilab! This seems to be the underlying message of yesterday's BBC News article announcing that CERN's Large Hadron Collider (LHC) in Switzerland has smashed the record for most particle collisions, doubling the previous rate to reach about 10,000 particle collisions per second. More collisions means that many more opportunities to observe interesting new physics. And while Fermilab still holds the record for highest beam intensity at its Tevatron collider, the LHC's collision rate leaves the poor aging machine in the dust. Boo-yah!
Click to expand...

LHC is the future, it takes years to fine tune a machine like that and i will be the greatest collider for decades, too bad that Superconducting Super Collider was canceled, a huge blow to physics.
K

CERN- the LHC , its the most advanced piece of scientific apparatus ever constructed and an absolute marvel of engineering, almost beyond comprehension, its jaw dropping. As a lay person who knows very little of this field, (apologies) i was intrigued by the images from the plancts telescope this week, is there any possibility that information from plancts images may yield the very essence of what CERN is trying to achieve? Again i apologise , i know very little indeed and im probably way out of my depth here but its fascinating stuff!
C

I also think the higgs boson will not be found - but not because of a lack of energy by ther LHC. I have long thought there is a fundamental flaw in our understanding of gravity. I also believe dark matter is nothing more than a "fudge factor" penciled in to compensate for that same flaw.
D

I wonder what they're going to be presenting ...

If you really want to test your physics knowledge read some of the presentations:

There are many threads that could use it's insertion. I also think it belongs in a pinned thread somewhere....just need to ponder where it should be placed as a reference. I'm open to suggestions (via PM please, so as not to clutter this discussion with off-topic posts) 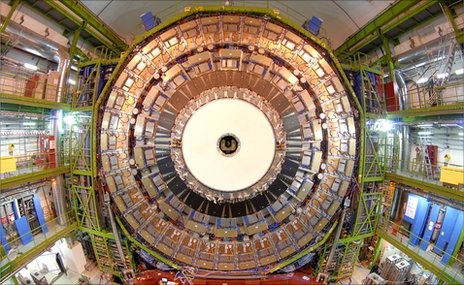 Physicists at the Large Hadron Collider (LHC) have seen several candidates for the heaviest sub-atomic particle known to science.

If the observations are confirmed, it would be a first for Europe; so far, the top quark particle has only been generated by one lab in the US.
Click to expand...

Details of the top quark candidates were presented at a major particle physics conference in Paris.

Several possible detections of top quarks have been made recently by the LHC's Atlas and Compact Muon Solenoid (CMS) experiments.

Atlas has seen nine collision events compatible with the top quark; CMS has observed 3-4 candidate events. But physicists stressed that more data was needed in order to support the conclusive observation of top quark production at the LHC.
Click to expand... 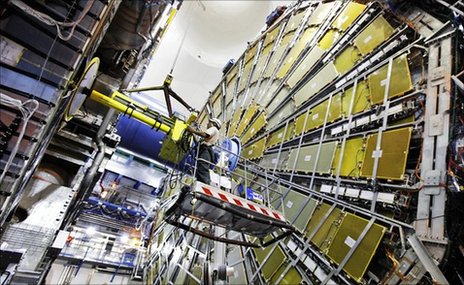 The Atlas detector has seen nine candidates for the top quark
Click to expand... 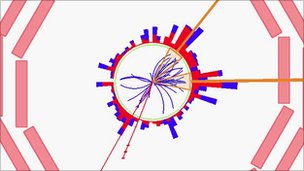 I came across this sentence in the Wikipedia article on the Higgs boson:

The highest possible mass scale allowed for the Higgs boson (or some other electroweak symmetry breaking mechanism) is 1.4 TeV; beyond this point, the Standard Model becomes inconsistent without such a mechanism, because unitarity is violated in certain scattering processes.
Click to expand...

I don't know what this sentence means, but it sounds like it's very important to the Standard Model of particle physics that the Higgs boson has an equivalent mass that's at or below this limiting value. What would be the consequences if it's above this limiting value? Would a lot of the Standard Model need to be changed, or just a small part of it?

I understand that the LHC is designed to operate in the 7 TeV range. If it doesn't detect the Higgs boson at this range, what would it mean?

The Fermilab facility houses the Main Injector, a proton synchrotron accelerator. Beneath it in the same tunnel is another synchrotron, a superconducting magnetic ring called the Tevatron which boosts the energy to 1 TeV. There is an antiproton storage ring which achieves collision energies of about 1.8 TeV.
Click to expand...

So if that is true, according to the info I found listed above and at http://hyperphysics.phy-astr.gsu.edu/hbase/particles/accel.html. Fermilab probably should have detected something by now................
E

Mapping the Secrets of the Universe: ATLAS is a particle physics experiment at the Large Hadron Collider at CERN. The ATLAS detector is searching for new discoveries in the head-on collisions of protons of extraordinarily high energy. ATLAS will learn about the basic forces that have shaped our Universe since the beginning of time and that will determine its fate. Among the possible unknowns are the origin of mass, extra dimensions of space, unification of fundamental forces, and evidence for dark matter candidates in the Universe.
Click to expand...

ATLAS is one of two general-purpose detectors at the LHC. It will investigate a wide range of physics, including the search for the Higgs boson, extra dimensions, and particles that could make up dark matter. ATLAS will record sets of measurements on the particles created in collisions - their paths, energies, and their identities.

This is accomplished in ATLAS through six different detecting subsystems that identify particles and measure their momentum and energy. Another vital element of ATLAS is the huge magnet system that bends the paths of charged particles for momentum measurement.

The interactions in the ATLAS detectors will create an enormous dataflow. To digest these data, ATLAS needs a very advanced trigger and data acquisition system, and a large computing system. More than 2900 scientists from 172 institutes in 37 countries work on the ATLAS experiment.

I'm disappointed that anyone chose to respond to this piece of nonsense.
Click to expand...

Better to respond than to not respond.

According to what I have read the Higgs-Boson is supposed to be the creation particle. I doubt very much that HB's would be created by cosmic rays when a cosmic ray is created by an energetic release. So how could a cosmic ray that is a causility create the HB's? What you are saying is that the cosmic ray came before the HB's That wouldn't be possible since the HB would have created the cosmic rays and not the otherway around.
C

I'm disappointed that anyone chose to respond to this piece of nonsense.
Click to expand...

Better to respond than to not respond.

According to what I have read the Higgs-Boson is supposed to be the creation particle. I doubt very much that HB's would be created by cosmic rays when a cosmic ray is created by an energetic release. So how could a cosmic ray that is a causility create the HB's? What you are saying is that the cosmic ray came before the HB's That wouldn't be possible since the HB would have created the cosmic rays and not the otherway around.
Click to expand...

I don't think any scientist would describe the Higgs boson as a "creation particle". If it exists, it's thought to be the force carrier that imparts mass to fermions.