Question Where to see the Milky Way in the UK

Can anyone tell me if it’s possible to view the Milky Way in the UK & if so, where and when? Many thankS.

ZaydokJ said:
Can anyone tell me if it’s possible to view the Milky Way in the UK & if so, where and when? Many thankS.
Click to expand...

Time of year will give different views.

There is a useful article entitled "Explore the Milky Way" in recent edition 100 of "All about Space" which should give you all you need.

Catastrophe said:
Time of year will give different views.

There is a useful article entitled "Explore the Milky Way" in recent edition 100 of "All about Space" which should give you all you need.

Thanks for that Cat. I can’t seem to find it when I search via Google. Any chance you can provide a link to it please?

ZaydokJ said:
Thanks for that Cat. I can’t seem to find it when I search via Google. Any chance you can provide a link to it please?
Click to expand...

"All about Space" is a monthly magazine. So as not to be accused of advertising, I have to say that there are other very good astronomy magazines I take including "Astronomy", "Astronomy Now" and "The Sky at Night".

All astronomy magazines I know have a section on the current night sky, and they all show the position of the Milky Way.

I searched "Milky Way this month" and found this: 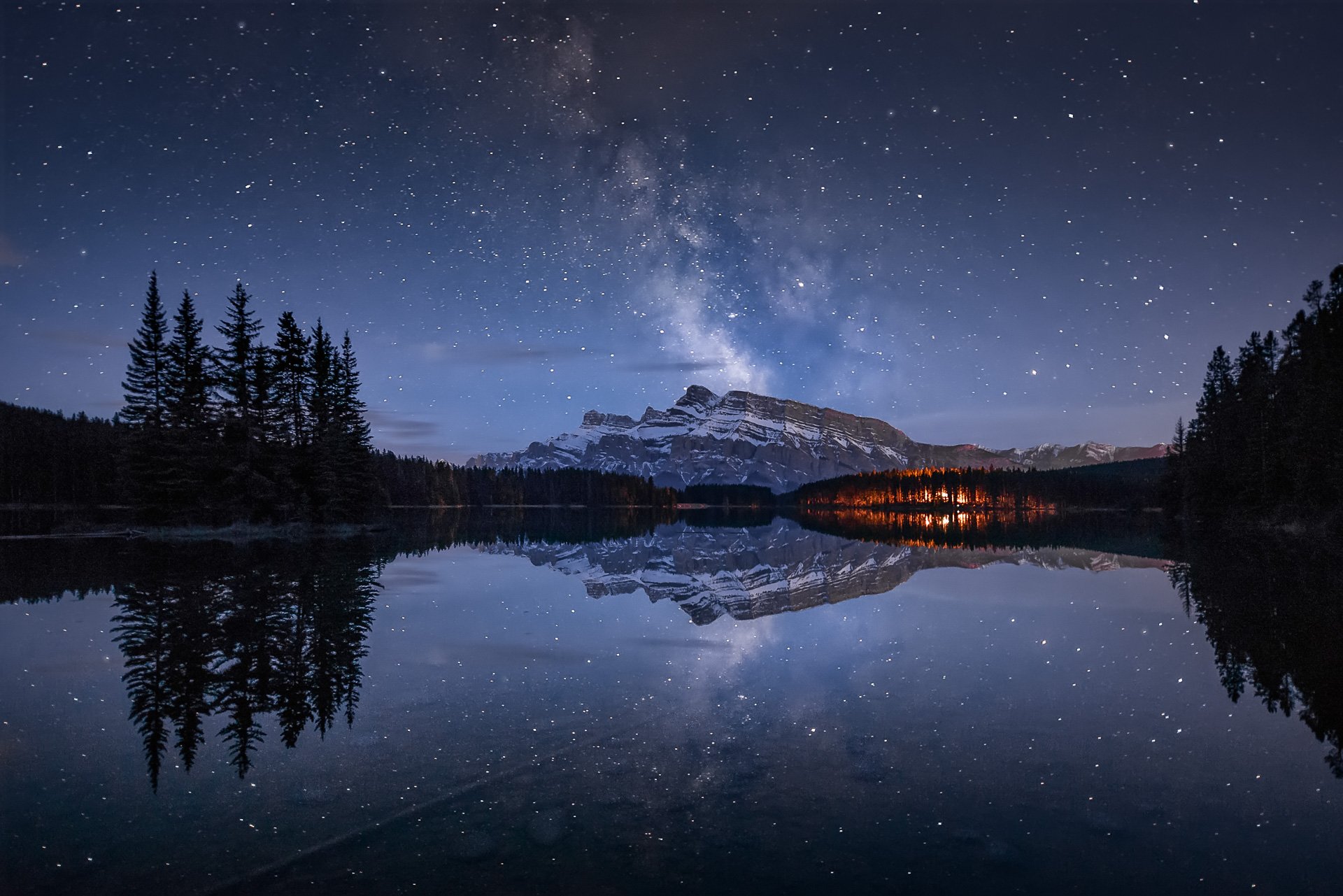 If there is a type of photography where a great planning increases your chances of success, that’s Milky Way photography. The Milky Way is visible

This may answer your question.

The Bortle Artificial light scale is used worldwide by astronomers to gauge the level of light pollution:


Class 1: Excellent dark-sky site - Black
The zodiacal light, Gegenschein, and zodiacal band (S &T: October 2000, page 116) are all visible - the zodiacal light to a striking degree, and the zodiacal band spanning the entire sky. Even with direct vision, the galaxy M33 is an obvious naked-eye object. The Scorpius and Sagittarius region of the Milky Way casts obvious diffuse shadows on the ground. To the unaided eye the limiting magnitude is 7.6 to 8.0 (with effort); the presence of Jupiter or Venus in the sky seems to degrade dark adaptation. Airglow (a very faint, naturally occurring glow most evident within about 15 degrees of the horizon) is readily apparent. With a 32-centimeter (12½) scope, stars to magnitude 17.5 can be detected with effort, while a 50-cm (20-inch) instrument used with moderate magnification will reach 19th magnitude. If you are observing on a grass-covered field bordered by trees, your telescope, companions, and vehicle are almost totally invisible. This is an observer's Nirvana!

Class 2: Typical truly dark site - Gray
Airglow may be weakly apparent along the horizon. M33 is rather easily seen with direct vision. The summer Milky Way is highly structured to the unaided eye, and its brightest parts look like veined marble when viewed with ordinary binoculars. The zodiacal light is still bright enough to cast weak shadows just before dawn and after dusk, and its color can be seen as distinctly yellowish when compared with the blue-white of the Milky Way. Any clouds in the sky are visible only as dark holes or voids in the starry background. You can see your telescope and surroundings only vaguely, except where they project against the sky. Many of the Messier globular clusters are distinct naked-eye objects. The limiting naked-eye magnitude is as faint as 7.1 to 7.5, while a 32-cm telescope reaches to magnitude 16 or 17.

Class 3: Rural sky - Blue
Some indication of light pollution is evident along the horizon. Clouds may appear faintly illuminated in the brightest parts of the sky near the horizon but are dark overhead. The Milky Way still appears complex, and globular clusters such as M4, M5, M15, and M22 are all distinct naked-eye objects. M33 is easy to see with averted vision. The zodiacal light is striking in spring and autumn (when it extends 60 degrees above the horizon after dusk and before dawn) and its color is at least weakly indicated. Your telescope is vaguely apparent at a distance of 20 or 30 feet. The naked-eye limiting magnitude is 6.6 to 7.0, and a 32-cm reflector will reach to 16th magnitude. Long exposure astrophotos might show some light pollution gradient, but visual observing is relatively unimpaired.

Class 4: Rural/ suburban transition
Fairly obvious light-pollution domes are apparent over population centers in several directions. The zodiacal light is clearly evident but doesn't even extend halfway to the zenith at the beginning or end of twilight. The Milky Way well above the horizon is still impressive but lacks all but the most obvious structure. M33 is a difficult averted-vision object and is detectable only when at an altitude higher than 50 degrees. Clouds in the direction of light-pollution sources are illuminated but only slightly so, and are still dark overhead. You can make out your telescope rather clearly at a distance. The maximum naked-eye limiting magnitude is 6.1 to 6.5, and a 32-cm reflector used with moderate magnification will reveal stars of magnitude 15.5. Modest to serious impact to deep sky observing and imaging.

Class 5: Suburban sky
Only hints of the zodiacal light are seen on the best spring and autumn nights. The Milky Way is very weak or invisible near the horizon and looks rather washed out overhead. Light sources are evident in most if not all directions. Over most or all of the sky, clouds are quite noticeably brighter than the sky itself. The naked-eye limit is around 5.6 to 6.0, and a 32-cm reflector will reach about magnitude 14.5 to 15.

Class 6: Bright suburban sky
No trace of the zodiacal light can be seen, even on the best nights. Any indications of the Milky Way are apparent only toward the zenith. The sky within 35 degrees of the horizon glows grayish white. Clouds anywhere in the sky appear fairly bright. You have no trouble seeing eyepieces and telescope accessories on an observing table. M33 is impossible to see without binoculars, and M31 is only modestly apparent to the unaided eye. The naked-eye limit is about 5.5, and a 32-cm telescope used at moderate powers will show stars at magnitude 14.0 to 14.5.

Class 7: Suburban/urban transition
The entire sky background has a vague, grayish white hue. Strong light sources are evident in all directions. The Milky Way is totally invisible or nearly so. M44 or M31 may be glimpsed with the unaided eye but are very indistinct. Clouds are brilliantly lit. Even in moderate-size telescopes, the brightest Messier objects are pale ghosts of their true selves. The naked-eye limiting magnitude is 5.0 if you really try, and a 32-cm reflector will barely reach 14th magnitude. Less than 100 stars visible over 30 degrees elevation.

Class 8: City sky - white
The sky glows whitish gray or orangish, and you can read newspaper headlines without difficulty. M31 and M44 may be barely glimpsed by an experienced observer on good nights, and only the bright Messier objects are detectable with a modest-size telescope. Some of the stars making up the familiar constellation patterns are difficult to see or are absent entirely. The naked eye can pick out stars down to magnitude 4.5 at best, if you know just where to look, and the stellar limit for a 32-cm reflector is little better than magnitude 13.

Class 9: Inner-city sky - White
The entire sky is brightly lit, even at the zenith. Many stars making up familiar constellation figures are invisible, and dim constellations such as Cancer and Pisces are not seen at all. Aside from perhaps the Pleiades, no Messier objects are visible to the unaided eye. The only celestial objects that really provide pleasing telescopic views are the Moon, the planets, and a few of the brightest star clusters (if you can find them). The naked-eye limiting magnitude is 4.0 or less. Less than 20 stars visible over 30 degrees elevation.

Unfortunately, the levels of light pollution in the UK are too high to allow for the naked eye to see the faint milky way. There are only a few dark areas in Scotland that will barely allow you to see it. I would attach an LP map but there is some sort of error with SPACE.COM that will not allow for links to photos.
You must log in or register to reply here.
Share:
Facebook Twitter Reddit Pinterest Tumblr WhatsApp Email Link