It's been a little over a year since the Space.com forums relaunched and we're so glad to have all of you here with us to chat about all things space! It's been awhile since our last giveaway, and what better end to 2020 than winning some free goodies? So, we've put together 4 prize packages that each include a Space.com patch, a Space.com hat, and 3 gorgeous 11x17 Space.com 20th anniversary posters.

To enter, just sign in to the forums and leave a comment below telling us your favorite space related memory, and that's it! You're entered. Only one comment per person counts as an entry, but feel free to chat with other members.

The giveaway is open internationally, but we have to be able to ship to you via FedEx so unfortunately we do have to limit entries to those on the planet Earth. Sorry intergalactic friends! Complete both steps before 11:59 PM ET on December 14, 2020. After the deadline to enter, we’ll randomly select 4 winners and announce in this thread. If you’re a winner, we'll reach out to you via email for your shipping information. If you don't reply to our message with your shipping address within 5 business days, we'll move on to the next winner, so keep an eye on your inbox!

Good luck and have fun! 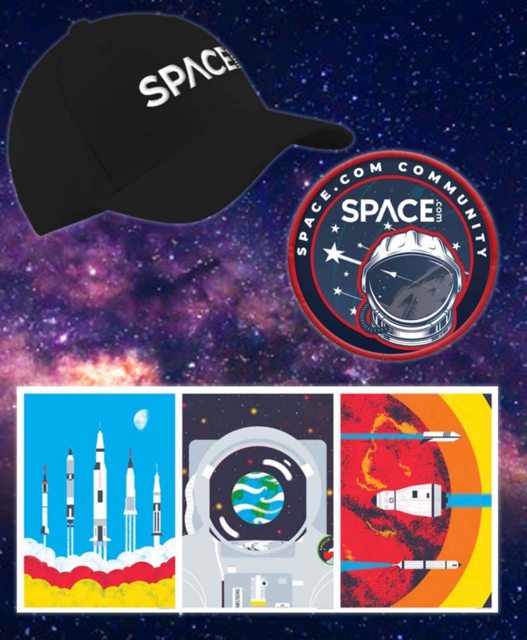 Favorite space memory. There are WAY too many, but if I had to pick just one...

Sept 29, 1988 : America's return to space following the Challenger disaster. I was serving in the Air Force at the time and we all took an hour or so off to watch liftoff on a small, portable 4" TV screen.

My daughter turned three a month ago and she has always had a keen interest for Saturn as it looks different from any other planet of the solar system. So for her birthday, we allowed her to stay up a little later than usual and have a look at Saturn through my Dobsonian telescope.

She loved it and could not stop talking about it for days afterwards!

She's getting a model of Saturn to hang on the ceiling of her bedroom for Xmas and I can not wait to see her reaction
Reactions: Wolfshadw

Well, there are too many.

First, Mangalyaan or the Mars Orbiter Mission (MOM). The cheapest ever mission to Mars, and it was successful. Hats off to ISRO.

Second, First trip to a planetarium. I... I... I still can't describe the moment in words, when I saw the Saturn and the Milky Way in 3D. One of the most awesome moment ever.

Third, the 1969 Apollo 11 space mission. Sure, I was nowhere when it happened. But, I saw the clippings and read it. And, of course, it's one of the most popular space folklore.
Reactions: Ruscha.daksha02, Catastrophe and Helio

I saw Apollo 11, as a child, launch/land/return, on a black and white TV and was in awe of the entire experience. To this day, I am amazed by what was accomplished with so little technology (relative to today).

When I graduated from high school in 1981, a favorite teacher of mine presented me with a copy of Cosmos. I read it cover to cover, multiple times. I can't help but look up to the stars and wonder what is out there.
Reactions: Ruscha.daksha02, Helio, Wolfshadw and 1 other person

It's hard not to tell my story about being stuck in a corn field with my fellow, uh, beverage fanatics on the night Armstrong and Aldrin landed on the Moon. The promise that I would be home in time to watch the landing was a broken one. So, I walked in total darkness for a mile to the first home I could find. It was a trailer home and they very graciously allowed me to join them in this world event. I was one of the few on the planet, no doubt, that saw three Armstrongs take those first three simultaneous steps, even when I used one eye.

But that's not my entry, since it's a PG level story, perhaps. and only one story counts, so...

The most thrilling astro-event I have had must be the Sunday morning in 2012 when Keith Little called me to ask if I had checked my email. The night before was the Flash the Station event where Robert Reeves and astronaut Don Pettit worked together with both the San Antonio and Austin astronomy clubs, along with NASA, to allow Don to observe from the ISS our flashing him from a small observatory north of San Antonio. Such attempts had always failed in the past. Don took images of us flashing him and sent us pictures the next morning. It was the first time in human history that a light signal (not just a city turning on lights) had ever been accomplished, so I was told. Don , who was supposed to call us from his view in the cupola on the ISS to let us know if he could see us as he zipped along the space highway at 18,000 mph, never made that call -- he said he was too busy taking pictures and was out of range when he tried to call us -- so we thought we had failed. The email Don sent out included not only images of the success of our search lights but also the success with the laser I had just received that morning (rated at 1 watt, but I learned it is probably only 1/2 watt).

The link below shows the image with just the blue laser while the somewhat brighter searchlights were in the "off" mode that was controlled by Robert with his mega horn standing atop the observatory.

I believe my favorite, and yet saddest, was the landing of the Atlantis on the final shuttle mission. I still remember the Challenger back in 86. I was 15 and it took me a few days to realize what really just happened. Some say we are in a new space race. And for the sake of mankind.........I hope so. We need something to band together on, steer us away from politics, diseases, wars, and so on. As a veteran myself, I have seen some of the best man can offer, and the worse. I was hoping to see the new Starship launch tonight, but sadly it aborted.

Here is to the next space race. Turning our eyes upward.......instead of against each other.

I was preschool and laying on the grass with my cousin Richard and uncle Joe on a beautiful summer night when he pointed out Sputnik to us. I have been fascinated by space since then.
Reactions: Helio

My fifth grade teacher would give the class Apollo, embroidered space patches during the late 60's launch program. I had quite a collection but lost them. Lots of progress and history back then.
I was lucky I had a teacher that took interest and shared her enthusiasm with our class!
I moved to Florida, close to the Space Coast in 1990 and saw my first shuttle launch from Titusville. I believed I cried at the sight. The "rumble" and every other launch since, never gets old.
I again was lucky to have witnessed so many shuttle liftoffs and the sonic boom landings that shook the glass windows. I saved the last shuttle video and it was sad to see the program retired.
Space X has out performed ever imaginable boundary in such a short time and once again, I am looking up at flights into the future. As if today, Elon Musk made claims to faith in getting to Mars. I believe him.