The secret X37B is not a spy plane. It is a test platform for an advanced propulsion system using science that is publicly denounced as breaking some sort of GR parity law. Physics based on a double standard.

The inertial field (the mechanism of inertia) was found by gravimeters operated by the Texas Company (later Texaco) in 1939. General Relativity became immediately irrelevant except as a smoke screen to hide the new science. By 1970, concealment of contrary phenomena and dogmatic and arbitrary interpretation of GR had led physics into a dead end.

The Standard Model for particles was both science and a smoke screen. People That Don’t Share Science (PTDSS) needed a way to create an artificial inertial field and the answer could only be found at the atomic level. The hunt for the next great particle was a cover story for finding a means of artificially generating an inertial field.

Whether the PTDSS’s found the Higgs Boson is irrelevant, they did find out how to generate an artificial inertial field. Imagine a device that generates motion without using reaction mass. Converting one form of energy into kinetic energy (the inertial field). PTDSS intentionally released “propulsion by microwave horn” as a brilliant example of a wild goose chase.

Unlike the “Warp Field” Syfy plot device the inertial field produces motion at sub-light speeds. The speed of light remains a formidable barrier.

The X37B might have an undeclared fission reactor on board. Particles from this reactor might be used to generate the atomic interactions which produce the artificial inertial field.

Both the inertial field and the atomic method of producing an artificial inertial field were stolen from the people of Earth by science quietly evolving in secret while keeping the old irrelevant science publicly in place.
Last edited: May 21, 2020

This “secret” spy plane has a very high Delta-V according to published reports. If you were testing an advanced propulsion system you would also display a high Delta-V. So they published a bunch of fake specifications that would explain away the X37B’s unusual maneuverability.

The “secret” interior was largely filled by two fuel tanks which are probably a fraction of the size stated in the published specs.

The stated electrical power source is solar cells and batteries. I will throw away my quantum of credibility and say that it has a medium output cold fusion reactor. It took 40 days to react to the publishing of the first Cold Fusion paper before Nature magazine was calling it pathological science. Pons and Fleischmann really hit a nerve. Public sources for Palladium incorporate several ppm of specific elemental contaminates that poison the reaction.

The assumed electrical power capacity of the X37B is pretty low so any experiments would have to be low powered. Fuel power cells and their tanks are quite bulky.

Has anyone studied the thermal emissions of the X37B? My guess is that the fusion reactor is generating a lot of excess heat that has to be radiated away. Those solar cells could mask a large thermal radiator.

Why did they choose a space plane? A spy satellite does not have to return to Earth, it can transmit anything that it captures to the ground. The published cargo capacity for the X37B is ridiculously small. Calling it a spy plane is a great cover story when you start acting paranoid when people start asking questions about it.

Whatever is on board the X37B the least interesting possibility is that it is a spy plane.
Last edited: May 21, 2020

Most X-37B payloads are classified, and the Air Force releases few details about the spacecraft's orbit and activities. The only OTV-5 payload that Air Force officials have revealed is the Advanced Structurally Embedded Thermal Spreader, or ASETS-II.

Developed by the U.S. Air Force Research Laboratory (AFRL), this cargo is testing experimental electronics and oscillating heat pipes for long-duration stints in the space environment.

They are dumping a lot of heat for the something having such limited electrical generating capacity (based on solar arrays?).

The heat sink is listed as payload not as protective shielding for re-entry.

In Earth orbit according to what I have found, rotation and orbital shadows will average out to a cool room temperature if the object has enough mass. The cold Apollo 13 command module scene supports this scenario.

At the least, heat generation seems a bit high for something running on batteries and solar arrays.

Does anyone have a good picture showing those solar arrays deployed?

Scrap the idea of an undeclared fission reactor. Fission reactors/thermoelectric generators are placed on a long boom to minimize radiation. Fission reactors and electronics don’t mix. The plane design would prevent such a reactor from burning up on reentry and spreading embarrassing radioactive material all over the place (happened before). The plane is to recover the experiment, not to spy.

The experiments of the X37B could have a low duty cycle. Kind of like a cell phone which takes a day to charge and lasts 10 minutes.

This would also explain the large thermal radiator since a day’s worth of solar power might be pulled out of the batteries in 10 minutes and that would produce a large amount of waste heat.

This amount of power doesn’t make sense for electronics which could be tested on the ground. Small optics are inferior to big optics and optics does not consume a lot of power over short intervals.

Ion drives can be tested on the ground and are operational on some satellites and spacecraft already. Ion drives have been under development for nearly 50 years (theoretical to practical). Ion drives are not a secret and are not worth this secrecy.

If it was a weapon other countries would have cheerfully blown it out of the sky if it had attacked one of their space assets.

I give a high probability that the X37B is testing a propulsion technology which has been in development for more than 50 years.

It is logical to assume that this type of drive technology would violate the principle of equivalence within General Relativity (making GR irrelevant). At the same time (approximately 50 years ago) the American scientific hierarchy became rigid and dogmatic about the infallibility of General Relativity.

Sensitive compartmented information (SCI) can hide an elephant in the room.

Who can see the reports about the X37B drive technology?

Has this information ever crossed the U.S. President’s desk?

What civilian authority has control over this program?

When there is a paper trail to follow, a conspiracy is not theoretical. 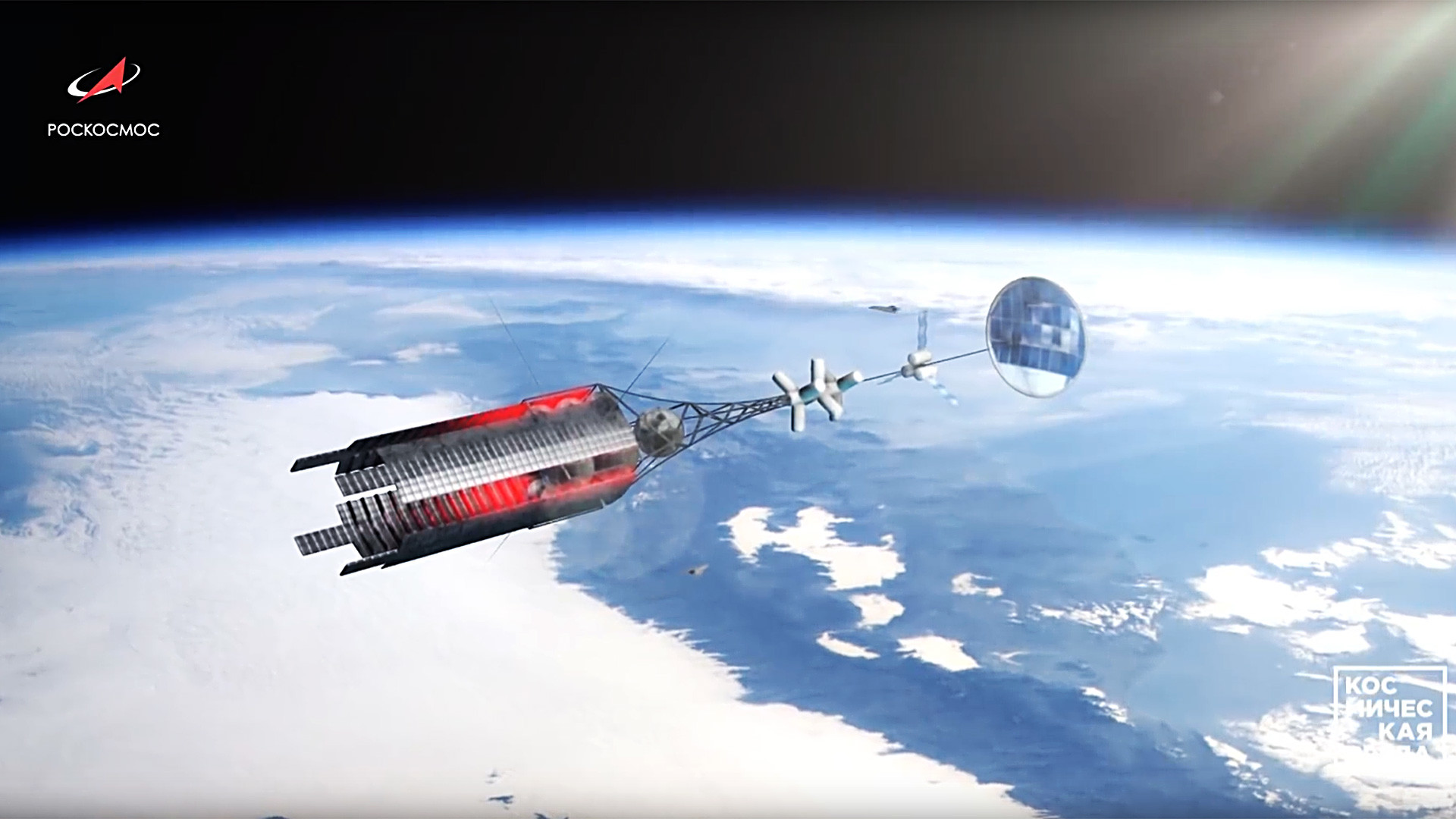 Also nix the cold fusion reactor. Converting heat to electricity usually requires a fluid or gas and mechanical systems like turbines. A theoretical cold fusion reactor design would look a lot like a fission reactor (with less shielding). Reactors tend to be suitable for fixed installations or cargo ship size mobile installations. Too large, heavy, and complex to be useful for this application.

Beyond the orbit of Mars solar arrays are worthless. Even if the drive works, we still need a space rated nuclear power source.

Shown is Roscosmos nuclear powered spacecraft. The glowing radiators are dumping heat. Yes, it does look like James Cameron’s design.