Sounds like the Sundancer propulsion systems are coming together....and the flight controllers are due for delivery Q1 2010.

"We are extremely pleased that Aerojet selected Andrews for this important program," said Jason Andrews, President of Andrews Space. "Our team has done a tremendous job to deliver the hardware under tight schedule and budget constraints consistent with the emerging commercial space sector."

The diode boards, along with the fault-tolerant propulsion controllers, are among the growing list of affordable and reliable avionics and attitude determination and control products offered by Andrews targeted toward responsive spacecraft applications.
Click to expand...

I see that Space X has Bigelow on their newly updated manifest for a 2011 F9 launch.

question about bigelow: they don't seem to have much information on the status of the living bugs that, according to my understanding, they launched on Genesis II. Anybody know if the bugs are still alive, and can we see them floating around on the web???

neutrino78x":x967a175 said:
question about bigelow: they don't seem to have much information on the status of the living bugs that, according to my understanding, they launched on Genesis II. Anybody know if the bugs are still alive, and can we see them floating around on the web???

Even if they'd consumed each other they'd all be dead by now.
T

The bugs were dead before launch. The launch was delayed for so long, with the Gallileo all folded up in storage, that their life-support ran out.
B

Dragon could be ready years sooner if the Augustine recommendations follow Ride's ideas. Granted it could cut their costs. Nevertheless, the more the merrier as they are correct in not putting all their eggs in one basket.
B

Bigelow sure can be tight lipped. We know he's making progress, but he just doesn't make too many public announcements (for whatever reason).
Even so, I Google image searched "Bigelow Aerospace" & found some intriguing nuggets. I didn't read the accompanying articles to see where these pix came from, but I included the original links too.
http://images.google.com/imgres?imgurl= ... 0%26um%3D1 This one is my desktop at home & at the office. 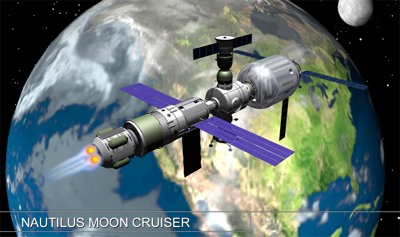 This is a possible interior layout.

This is the most talked about first station configuration.

This is a possible Moon Base layout & accompanying article from The Space Review in 2004
http://www.thespacereview.com/article/293/1 I've never seen those pics of the interior before. nice find
D

Try this: Lockheed concept for an AtlasV crew vehicle from a few years ago. Note the maneuvering engine/LAS is attached at the bottom Mercury style. Rather interesting given recent news about Bigelow building "Orion Lite".

Looks like this has been churning around over there for quite a while. HOLD THE PRESSES: ISS may get Bigelow module 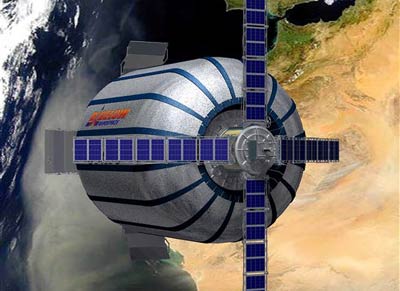 If this happens it'll be the return of NASA's canceled TransHab tech in greatly enhanced Bigelow form.

NASA is considering attaching a Bigelow Aerospace inflatable module to the International Space Station, in a return to a concept the agency had more than a decade ago.
>
In 2007 Bigelow Aerospace founder Robert Bigelow announced an $11.9 million price tag for four weeks at his space station in 2007 dollars, excluding the cost of transport.

However, internal NASA documents passed to Flightglobal show the US space agency is now interested in attaching a Bigelow module, but neither the company or NASA were available for comment.

The interest in the Bigelow technology follows NASA's decision to permanently attach its Italian-designed and built Raffaello multipurpose logistics module to the ISS.

Raffaello, expected to arrive in September 2010 on the final Space Shuttle mission, will be filled with spares to overcome problems with station logistics once the Shuttle fleet is retired.

In the Johnson Space Center's 8 September edition of its 8th Floor newsletter it is stated that Raffaello will be attached at the space station's Node 1 nadir port, which faces the Earth's surface.
>
Click to expand...

That would be very cool and an incredibly sensible idea, would definitely add a lot more relevance to the space station. It may indeed redeem itself and become known as where space was commercialized (apart from satellites).

Am I understanding the article right in that the bigelow module would attach itself to the shuttle mating adapter which in turn will be attached to the arriving Tranquility? That seems to be the only place left and would make good use of that node after the shuttles are retired. What was tranquility? Was that the part with the windows?

And why would they put that European, what essentially is a storage closet, on the Earth side, would've thought they'd want a window there to observe the earth.

Now, an even more important question, if Bigelow now gets a 'node' on the station, what is stopping Bigelow to continue extending that node and attaching even more modules. The shuttle adapter was already moved to tranquilty so just move it behind bigelow and keep going, or a new module with even more nodes.

The nice thing about this idea is that it is almost definite. The shuttle will be retired and the station will have one extra node, no president or congressman can change this. And it costs NOTHING!
D

Well...I doubt it costs nothing unless Bigelow picks up the tab, which he might if access to the module is allowed to be rented out.

Also don't forget that BA has said their modules could be equipped with different ports on either end - ex: Russian and LIDS
D

Bigelow's now patented base landing system, a liquid armor impact shield and his regolith based shield for landed bases.

I'm just posting the abstracts as the patent documents are too long. You might have register at freepatentsonline.com to see the PDF's, but maybe not. It's free so give it a go. I searched for "bigelow aerospace"

When reviewing the below patent data keep in mind the modification to the propulsion bus - landing legs added - in one of their concept images. Not exactly as in the patents images, but then it's an early version. For low gravity locales I guess pitons could be fired and the base reeled down and secured. (note: STF's are being developed by DARPA as a liquid armor that can be included in fabric combat jackets. On contact they harden enough to stop bullets.)

Shear-thickening fluid reinforced fabrics for use with an expandable spacecraft

A shear-thickening fluid is used in conjunction with fabrics utilized in an expandable spacecraft. The combination of the fluid and the fabric allows the fabric to resist penetration by hypervelocity particles in space.

Regolith container for use with a structure on an extraterrestrial mass

A regolith container for use with regolith on an extraterrestrial mass is disclosed. The filled container covers a portion of a spacecraft to provide the spacecraft with a measure of protection against space debris and radiation. The container can be compartmentalized to reduce the loss of regolith should from the container if a single compartment is penetrated. This is so cool Thanks
I don't remember reading anything about possibility of selling this modules on international market. Are there any restrictions or can anyone buy such a module ?
S

EarthlingX":3oje2138 said:
This is so cool Thanks
I don't remember reading anything about possibility of selling this modules on international market. Are there any restrictions or can anyone buy such a module ?
Click to expand...

Sell is a bad word! They will "lease" the space station to any nation that will pay. Likely 1 staff member from Bigelow and the rest your crew, they put your flag on the outside, and let you run any experiments you want on the inside as long as you keep paying.
E

EarthlingX":1zd0imqh said:
This is so cool Thanks
I don't remember reading anything about possibility of selling this modules on international market. Are there any restrictions or can anyone buy such a module ?
Click to expand...

Sell is a bad word! They will "lease" the space station to any nation that will pay. Likely 1 staff member from Bigelow and the rest your crew, they put your flag on the outside, and let you run any experiments you want on the inside as long as you keep paying.
Click to expand...

Is it just me or is bigelow trying to be the walmart of space tech?