An International Launch Services Proton rocket with a Breeze M upper stage will deploy the EchoStar 14 telecommunications spacecraft. The satellite will provide direct-to-home broadcast services to the United States for EchoStar Communications. 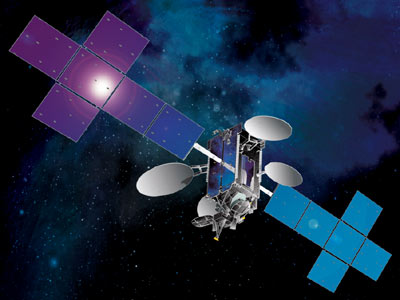 Preparations for Proton Launch with EchoStar 14 Satellite Begin at Baikonur 17.02.2010

Several days after 12th February successful Proton launch of the Intelsat 16 satellite, preparations began at Baikonur for another, the second Proton commercial mission of this year – the launch of the Space Systems/Loral built the EchosStar 14 spacecraft for EchoStar. EchoStar 14, a heavy satellite weighing more than 6300 kg at lift –off, is to be launched on a Khrunichev-built Proton M launch vehicle in March.

EchoStar 14 has arrived today, on 17 February, at its launch site at Baikonur. The satellite and containers of ground support equipment (GSE) were delivered to the Yubileiny airport aboard a cargo aircraft this morning.

The spacecraft and GSE will be transferred by train from the airport to the MIK 92-A-50 Launcher Integration and Test Building for pre-launch processing. Once the containers are unpacked, and all the equipment needed for spacecraft is installed in a clean room, pre-launch operations for EchoStar 14 will begin there.

The arrival (by plane) at Baikonur of the Breeze M upper stage that will be used for the EchoStar 14 launch is expected next week.

This launch is using Breeze-M upper stage. It consists from two modules, donut shaped add-on tank (which is jettisonable) and core module (Breeze-KM) with one RD-2000 engine burning N[sub]2[/sub]O[sub]4[/sub]/UDMH. It can be started up to 8 times during the flight which provides excellect accuracy to payload orbit placement.

Preparation for next launch of “Proton-M” with “Briz-M” upper-stage continues on Baikonur. This launch must put into orbit an American telecom satellite “Echostar-14”.

In current moment satellite and launch vehicle are passing autonomous tests in processing facility. “Briz-M” upper stage is being prepared for transportation to fueling station, where it will be fueled with propellant and its high-pressure tanks will be filled with gas.

Today the specialists of “Yuzhniy” Space center which is the branch of FGUP “TsENKI” have begun the preparation of launching site for “Proton-M” installation and launch organization.

Preparations continue on schedule at Baikonur for the launch of the Proton Breeze M carrier rocket with a U.S telecommunications satellite, the Space systems Loral built EchoStar-14.

The spacecraft and the Breeze M upper stage are finishing standalone processing being performed by SS/Loral and Khrunichev at integration and test facility “MIK” 92-A50.

Khrunichev has carried out most of standalone Breeze M testing and readied the Breeze M for transfer from MIK to a fuelling station (located at Area 31) for its high pressure tanks fuelling. The fuelling of the Breeze M began this morning. This is the first phase of US loading operations.

Because of the Breeze M design features, fuelling operations are broken into two steps. The first phase includes the Breeze M transfer from MIK to the fuelling station at Area 31, where its high pressure tanks will be filled with propellants. After the loading is completed, the Breeze M will then be transferred back to MIK for joint operations.

After SC/Breeze M assembly with the Proton rocket, prior to installation of the integrated launch vehicle (ILV) onto its launch pad, the Breeze M low pressure tanks will be loaded with propellants and oxidizer at the fuelling station located nearby the MIK 92-A50 Building, at the same Area 92.

Meanwhile, the EchoStar 14 spacecraft, placed on a test stand in a clean room, has successfully completed main electrical functional testing. The fuelling of the spacecraft started today and will be completed by Loral tomorrow. The fueled spacecraft will then undergo final checkouts and weighing operations.

After those final standalone activities on the spacecraft are completed, it will be moved to Hall 101, where the international launch team will start joint operations to assemble Ascent Unit of the Proton launch vehicle. The works on AU are expected to start in a couple of days.

The Echostar 14 is scheduled for launch aboard a Proton Breeze M launch vehicle on March 20, at 21:27 Moscow time, Russian space agency (Roscosmos) said.

Personnel of Roscosmos’s “Yuzhniy” Space center have already begun the preparatory activities at Launch Pad 200 for the EchoStar 14 launch.
Click to expand...

I just noticed that none of Khrunichev's links is working ? ... Site is down, probably it will come back, or are they working on a new one ? If so, no complains from me ..
Z


EarthlingX":2hjq9n05 said:
I just noticed that none of Khrunichev's links is working ? ... Site is down, probably it will come back, or are they working on a new one ? If so, no complains from me ..
Click to expand...

Site is down... That happens sometimes to them.
Z

All stand alone testing of the EchoStar-14 and the Breeze M upper stage has been successfully completed.

The next phase of the pre-launch preparations - the Proton’s Ascent Unit assembly operations - will be jointly carried out by Khrunichev, the spacecraft supplier Space Systems Loral, RUAG Space and International Launch Services.

Then the spacecraft/PLA assembly was mated to the Breese M upper stage. The EchoStar 14/PLA/the Breeze M stack is now being encapsulated in its launch vehicle fairing. The AU operations are expected to be completed tomorrow.

According to the pre-launch schedule, on March 11 the AU will be transported to the nearby clean room (#111), where it will be integrated to the Proton launcher.

The EchoStar 14 is scheduled for launch from Baikonur aboard a Proton Breeze M launch vehicle on March 20, at 21:27 Moscow time. This will be the 4th Proton launch in 2010 year. EchoStar 14 launch will be the 2nd Proton commercial mission this year, for ILS.
Click to expand...

Yet another photoreport: (Proton arrived to "local gasoline station" )

Echostar 14 atop Proton-M is now erected: 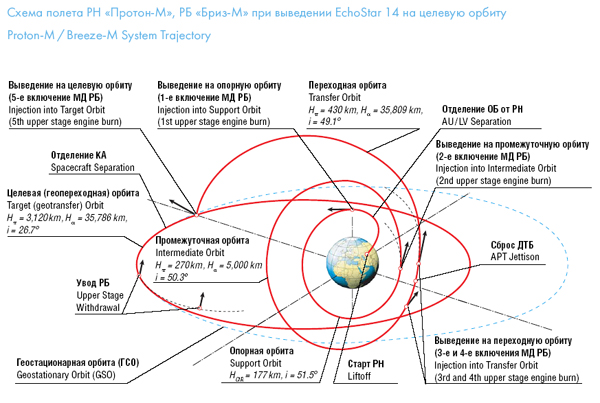 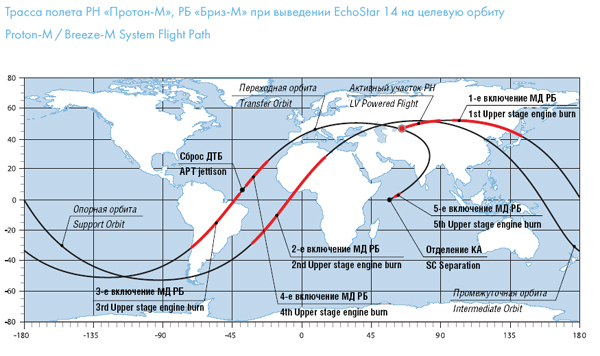 Khrunichev has published a couple of new photos from erection of Echostar-14 atop of Proton-M: http://www.khrunichev.ru/main.php?id=1&nid=523
T

Thanks, was just about to check

Nothing here works in FireFox, though, and i can't find direct links to put in Real Player. As usual, ...


EarthlingX":35vnchs0 said:
Nothing here works in FireFox, though, and i can't find direct links to put in Real Player. As usual, ...

Blah.... IE8 is the only good browser, no matter how much somebody blames it. And going even more offtopic I had to say I prefer more proper Linux distros like Debian than MacOS. But please let's not start discussing about browsers in this thread. Fact is that with IE these streams work, but that is only how they are implemented.
Z

I found a "new" video from prepairing the upperstage:
[youtube]http://www.youtube.com/watch?v=hcMcWWYCcmE[/youtube] ILS really seem to know how to deliver the payload and keep customer happy.
E

Maaan .. this is so off topically on topic :lol: They sure know how to feed a party Wish i was there ... :roll:
Z