Sidebar Sidebar
Previous Next
A

Just saw a video saying scientists say they are "producing what they say is the first matter that the Big Bang created 13.8 billion years ago." "It's called quark-gluon plasma". "The substance is a perfect liquid, flowing better than any other known matter, and it's the fundamental building block of all things." "The whole event lasted only 10 to the minus 23 seconds." "They were able to determine what happened between the moment the lead particles collided and the moment the resulting quark-gluon plasma condensed into hadrons."

"The first matter that the Big Bang created 13.8 billion years ago"? Too bad this "creation" is a common thing. It happens all the time out there. It's only something new to our scientists, not to the universe. It's nothing new to a universe that can and does do this at will in its own countless numbers of accelerators every moment of, and for all, time past and future at a level down near the Planck level (the BB level) constant of horizon. As I said elsewhere, the 'Time'-verse's quite bizarre, and quite physically 'now', time picture: a.k.a. the "quantum weirdness" of Quantum Mechanics.
Last edited: Jun 3, 2021
Reactions: rabsal
V

I think you mean quark-gluon plasma: 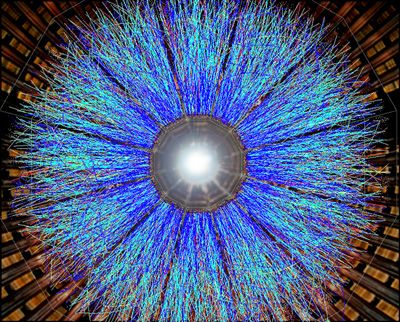 By colliding particles, physicists hope to recreate the earliest moments of our universe, on a much smaller scale.

By colliding particles, physicists hope to recreate the earliest moments of our universe, on a much smaller scale.

Ouch! I stand corrected! I was in too much of a hurry. Thank you.

I thought they found a new particle....but doesn't this finding prove the BH inflation theory?...I wont call it "my theory " until it's proven right...- it was a plasma as it expanded and that's the inflation FTLS space we are expanding in at a slower rate, but increasing...come on!
I am also starting to see that FTLS doesn't effect time, only mass and only that it becomes plasma...
You must log in or register to reply here.
Share:
Facebook Twitter Reddit Pinterest Tumblr WhatsApp Email Link