What if I told you that our universe was flooded with hundreds of kinds of nearly invisible particles and that, long ago, these particles formed a network of universe-spanning strings?

The Universe May Be Flooded with a Cobweb Network of Invisible Strings : Read more
Reactions: rod

Admin said:
What if I told you that our universe was flooded with hundreds of kinds of nearly invisible particles and that, long ago, these particles formed a network of universe-spanning strings?

The Universe May Be Flooded with a Cobweb Network of Invisible Strings : Read more
Click to expand...

String theory is dependent upon quantum gravity. Using the CMBR to test for strings is tentative. Testing to show that quantum gravity governs throughout the universe like Kepler's planetary laws, Newton or Einstein General Relativity, is needed. In astronomy, it took quite a history of testing and falsification before the heliocentric solar system was adopted vs. the geocentric. The same was true for Kepler's planetary laws, showing they were laws operating in other parts of the universe too like gravity, e.g., binary systems or exoplanets or the Galilean moons. String theory is no different, the same rigorous standards of testing need to be applied along with testing quantum gravity to show the *new math and new laws* are indeed laws of nature operating everywhere in the universe.
S

Good Theory. Looks like the Dark Energy Theory may be wrong. 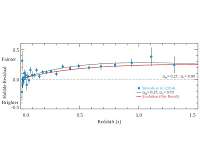 There have been reports on dark energy is wrong for accelerating space in cosmology. Here are two examples, http://phys.org/news/2016-10-universe-rateor.html and another more recent report, https://phys.org/news/2020-01-evidence-key-assumption-discovery-dark.html

My observation, The report disclosed some critical information about the axion.

"What makes this hard is that we're not exactly sure how these extra dimensions curl up on themselves, and there's somewhere around 10^200 possible ways to do it. But what these dimensional arrangements appear to have in common is the existence of axions, which, in string theory, are particles that wind themselves around some of the curled-up dimensions and get stuck. What's more, string theory doesn't predict just one axion but potentially hundreds of different kinds, at a variety of masses, including the axion that might appear in the theoretical predictions of the strong nuclear force. Silly strings So, we have lots of new kinds of particles with all sorts of masses..."

My observation, Alan Guth et al developed inflation in cosmology. Inflation features many new kinds of particles too like the inflaton and magnetic monopoles. How many new particles and masses are now used in cosmology - I have no idea
At the moment, the primary test object for string theory and quantum gravity seems to be the CMBR. Q: How I could look for 1E+200 possible extra dimensions by measuring and observing objects like the Galilean moons at Jupiter or binary stars like Sirius A and B (white dwarf)? For the present - cosmology string theory and quantum gravity is testing in the CMBR.

Looks like conflicts here and the methods of testing. Cosmology needs string theory in the CMBR but gravity waves may not confirm the extra dimensions it seems.
S