blogs.jpl.nasa.gov : Rocks and Stars with Amy: This Asteroid Inspected by #32

Over the course of the nine months we’ve been operating WISE, we’ve observed over 150,000 asteroids and comets of all different types. We had to pick all of these moving objects out of the hundreds of millions of sources observed all over the sky — so you can imagine that sifting through all those stars and galaxies to find the asteroids is not easy!

We use a lot of techniques to figure out how to distinguish an asteroid from a star or galaxy. Even though just about everything in the universe moves, asteroids are a whole lot closer to us than your average star (and certainly your average galaxy), so they appear to move from place to place in the WISE images over a timescale of minutes, unlike the much more distant stars. It’s almost like watching a pack of cyclists go by in the Tour de France. Also, WISE takes infrared images, which means that cooler objects like asteroids look different than the hotter stars. If you look at the picture below, you can see that the stars appear bright blue, whereas the sole asteroid in the frame appears red. That’s because the asteroid is about room temperature and is therefore much colder than the stars, which are thousands of degrees. Cooler objects will give off more of their light at longer, infrared wavelengths that our WISE telescope sees. We can use both of these unique properties of asteroids — their motion and their bright infrared signatures — to tease them out of the bazillions of stars and galaxies in the WISE images.
Click to expand...

wise.ssl.berkeley.edu : A Dying Star in a Different Light 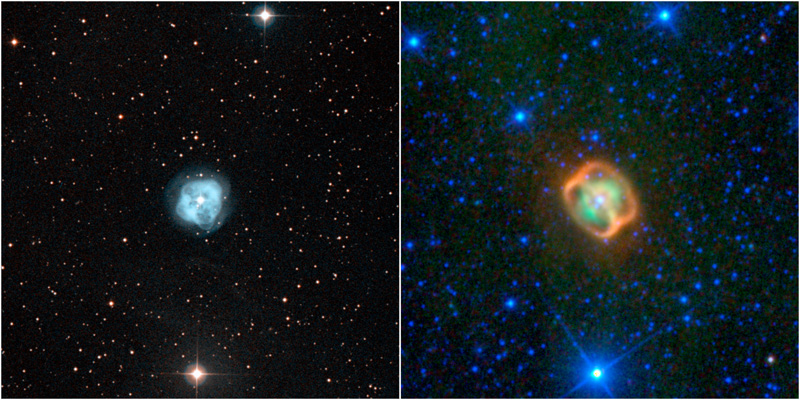 This image composite shows two views of a puffy, dying star, or planetary nebula, known as NGC 1514. The view on the left is from a ground-based, visible-light telescope; the view on the right shows the object in infrared light, as seen by NASA's Wide-field Infrared Survey Explorer, or WISE.

The object is actually a pair of stars -- one star is a dying giant somewhat heavier and hotter than our sun, and the other was an even larger star that has now contracted into a dense body called a white dwarf. As the giant star ages, it sheds some its outer layers of material to form a large bubble around the two stars. Jets of material from the white dwarf are thought to have smashed into this bubble wall. The areas where the jets hit the cavity walls appear as orange rings in the WISE image. This is because dust in the rings is being heated and glows with infrared light that WISE detects.

NGC 1514 is located 800 light-years away, in the constellation Taurus.

The visible-light image is from the Digitized Sky Survey, based at the Space Telescope Science Institute in Baltimore, Md.

PASADENA, Calif.-- A new image from NASA's Wide-field Infrared Survey Explorer shows what looks like a glowing jellyfish floating at the bottom of a dark, speckled sea. In reality, this critter belongs to the cosmos -- it's a dying star surrounded by fluorescing gas and two very unusual rings.

"I am reminded of the jellyfish exhibition at the Monterey Bay Aquarium -- beautiful things floating in water, except this one is in space," said Edward (Ned) Wright, the principal investigator of the WISE mission at UCLA, and a co-author of a paper on the findings, reported in the Astronomical Journal.
Click to expand...

A NASA spacecraft has snapped a photo of two dying stars encircled by vast rings, a view that scientists describe as a cosmic jellyfish floating in a starry sea.

NASA's Wide-field Infrared Survey Explorer (WISE) telescope took the eye-catching snapshot, which depicts a pair of dying stars surrounded by fluorescing gas and two unusual rings, the likes of which astronomers had never seen before.
Click to expand...