Interstellar Comet Borisov is no longer in one piece

Photos of the interstellar Comet Borisov taken by NASA's Hubble Space Telescope on March 28 and March 30 show an elongated nucleus that appears to have two distinct components, astronomers announced in a note today (April 2).

Interstellar Comet Borisov is no longer in one piece : Read more

It has been suggested that these interlopers from beyond our solar system are actually aliens visiting our neighborhood. So this "break-up" may actually be two parts of an alien space ship separating and beginning their mission of conquest. Its appearance as a "comet" is stealth technology to lull us into a false sense of security.

Let's hope the SOBs are sensitive to the coronavirus!
Reactions: Catastrophe

You might be on to something. It's a strange coincidence that the Corona virus started right when this came by, quite a coincidence...

Seems quite the fashion!


Remember this one?
Reactions: Craftsman X, dfjchem721 and COLGeek

And this could have been another atmospheric probe from one of their scout ships:

Okay, here is another report on the breakup, with more astronomical detail http://www.astronomerstelegram.org/?read=13613, 'Possible fragmentation of interstellar comet 2I/Borisov'

Now let us explore the alien spaceship connection, a scout ship. How many confirmed exoplanets? 4241, The Extrasolar Planets Encyclopaedia Question: if this is an alien scout ship, we have 4241 exoplanets, which one did it come from?

Question. How long did it take for the scout ship to travel just 4 light-years to reach our solar system? At a constant velocity of 30 km/s, the trip is 40,000 earth years.

Question: is flat earth science and astronomy more secure than reports of 2I/Borisov as an alien spaceship?

Hale-Bopp was a spectacular comet visible but some, claimed an alien space ship with that comet too with bad results., https://www.space.com/19931-hale-bopp.html
Reactions: Catastrophe and dfjchem721

I understand your interest in their origins rod, but they seem academic if this is an invasion of the earth by what can only be a hostile force of advanced aliens. If they were going to be friendly, they would have stopped by and said howdy, and maybe try for some give and take. But no, they just sail through, scan our systems capabilities and then plan for the attack. Where they came from is academic.

Seems we need to plan for this alien invasion. We need to assemble all the highest tech weapon systems, like scram-jets mounted with maximum yield nukes for an minimally effective response. It will at least show them we are not helpless. Kinetic high speed rail-guns and any lasers they have been working on need to be brought in and give them hell. We might be able to bluff our way out of this if they think we are too advanced for their risk/reward. Some of these aliens could be wimps. Look at the Ferengis. They wouldn't hang around after one nuke went off.........We can only hope they are of a similar character, or coronavirus will look like a hangnail.

Maybe just a change in aspect angle or simply the movement of chunks of the comet.

If aliens, we are in big trouble. Any species advanced enough to travel the stars is going to consider us a nuisance or something to poke at with a stick, at best.
Reactions: dfjchem721

Getting back to the more mundane but probable nature of this object, this "comet"* has an estimated size of ≤0.5km, so it is not very big. Still COLGeek's notion that this could simply represent a perspective issue is valid without further data. I would expect an increase in the brightness if this is disintegrating since that would expose more surface area to "ablation", and that was not reported.

All prior comets are believe derived from the solar system. If this object is truly from inter-stellar space, it should be referred to as an interstellar object with cometary appearance. I don't think it should be called a comet. I see from Wiki that they agree. This object is now known as 2I/Borisov, indicating the second interstellar visitor. 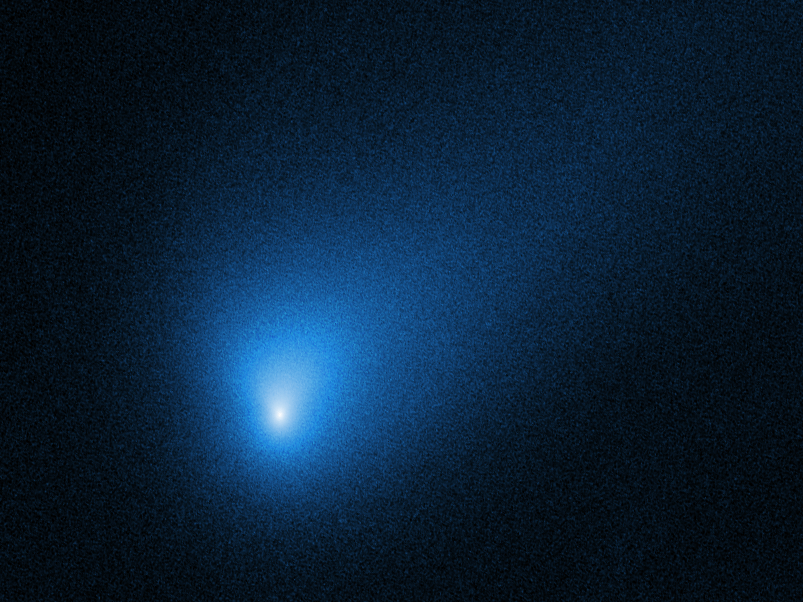 2I/Borisov has a fuzzy, coma shape too. Very common optical observation of comets using telescopes. My stargazing log records 52 comet sightings I made going back to April 1997 and April 1996, Hale-Bopp and Hyakutake. The most recent comet I observed is C/2019 Y4 (Atlas) on 30-March-2020 using my 10-inch Newtonian. From my stargazing log -

"Observed 2000-2200 EDT. Sunset 1929 EDT. I was able to view the comet again tonight but this time using the XT10i telescope. Very good views using 35-mm PO, 32-mm plossl, and 14-mm Delos eyepieces. Early in the evening I used the 35-mm PO and viewed Venus. Brilliant nearly half-moon shape, poked me in the eye This was a lovely early spring evening outdoors. I observed 3 polar orbiting satellites while I viewed the comet. 2 with unaided eyes, one passing through Auriga about as bright as Capella, the other passed across the FOV while I viewed the fuzzy coma of the comet. Not very bright but more distinct brighter core at 86x using the 14-mm Delos. Plenty of stars visible in the FOV with the comet too and using the 35-mm PO, I could see HIP40215 star and the comet in same FOV near 34/35x and 1.8-degree true FOV. The comet and star a bit more than 1-degree apart in angular separation near 2030 EDT or 0030 UT. While I observed in the east pasture, the waxing crescent Moon lit up the fields, I was bathed in moonlight. Very ethereal observing like this. Venus below the Pleiades was quite a sight in western sky tonight. Orion out and Leo."

I will stay the course charted by astronomy that 2I/Borisov is indeed a comet and not aliens visiting our solar system, plotting an invasion --Rod

IF there are aliens in the area (which I doubt) they are clearly technologically our superiors and have an ulterior motive for being here.
They will totally ignore our presence, quickly and efficiently collecting from Antarctica the ice they need for their G and Ts, and departing happily to the next item in the Galactic Zoo.

Rod, technically the "I" does not refer to a comet but to an interstellar visitor. Oumuamua (I/1) was not classified as a comet as no ejecta (" no signs of having a coma") was observed. It seems to have a hard body.

"Originally classified as comet C/2017 U1, it was later reclassified as asteroid A/2017 U1, due to the absence of a coma. Once it was unambiguously identified as coming from outside the Solar System, a new designation was created: I, for Interstellar object."*

Since you have a lot of experience with comets, rod, can you tell us how many classes of comets are based on visible spectra? I have some questions about the Oort cloud and these comet spectra might help clear them up.

dfjchem721, *how many classes of comets are based on visible spectra?* That is something I do not know but needs looking up All of my comet observations over the years are optical light views using binoculars, small refractor telescope (3.6 inch), and the 10-inch telescope I have now. Spectral imaging requires special equipment (I do not have), professionals do and perhaps some amateurs. Comet observing with large telescopes has a long history as well as chemical composition studies based upon spectra obtained (similar to spectral imaging of various asteroids). Comets coming from the Oort Cloud, remember there are no direct observations by telescopes or instruments that show the Oort Cloud. The Oort Cloud is an interpretation and model developed to explain various comets seen falling into the ecliptic from different directions, usually with large eccentricity measurements, many indicating a first perihelion passage and likely no more to follow, parabolic orbits, not multiple orbits around the Sun. A recent example from my stargazing log is C/2013 US10. I viewed this with 10x50 binoculars on 02-Jan-2016 and noted, "Yesterday morning was too cloudy but today was clear when I viewed 0600-0630 EST. Temperature = 0C, winds 250/05 kts, h = 70%. I used the 10x50 binoculars and had no trouble locating and viewing comet Catalina, C/2013 US10. Arcturus and the comet were in the same binocular field of view. The comet is moving NNW towards Ursa Major and Ursa Minor. The December 2015 Sky & Telescope report on page 45 list as mv +5.0. C/2013 US10 was a distinct fuzzy ball in the binoculars. As S&T reported, "...its a fresh comet falling into the solar system from the Oort Cloud for the first time..." Arcturus was high up in the sky so easy viewing."

If a spectral image was obtained for C2013 US10 as an example, the comet and spectral image would be interpreted as the image of a comet that came from the Oort Cloud, thus an Oort Cloud comet type. How different spectral images obtained for comets like this and compared to short period or long period comets, e.g. Halley's comet, I do not have information on that. Comets do not orbit the Sun for billions of years or even millions of years. Comets lose too much mass during perihelion passages to survive as comets for long ages. The creation of the Oort Cloud via the solar nebula model is also very interesting
Reactions: Catastrophe and dfjchem721

Yes, rod, so much of this involves thinking of the hypothetical Oort Cloud. The real question I have is does it even exist? My reading of its presumed formation with the solar system, and its vast spread out into space (estimated at 2-3 light years), made me wonder how such a flimsy gravitational hold the sun would have on such objects, and what passing massive objects might do to this cloud. We have been orbiting round the Milky Way for 4.5 billion years, and plowing through a lot of space likely occupied with brown and red dwarfs and even the occasional major league star. Everything isn't orbiting the galaxy in the same direction. Things are very chaotic as you surely know. It is not safe out there! Numerous close-enough gravitational encounters could easily have disrupted this cloud and largely dispersed it over time.

If the Oort Cloud really stretches out 3 light years, that is closer to the Alpha Centauri binary with ca. 2 solar masses, which should have some impact on the cloud's distribution if gravity is playing a role from such distant stars to such tiny objects, but probably only fairly recently.

An alternative to the Oort cloud theory that I consider possible is that most comets are/were derived from the Kuiper Belt, and any with long periods resulted from sling-shot gravitational action(s) by the sun or gas giants. We don't need an Oort Cloud to seed the area with long period comets. Look at the scattered disc, quite a source for lots of icy bodies to be found, and from a great variety of angles. KBOs could easily provide an abundance of these objects, and those that were not ejected from the solar system could end up as comets with various periods and "trajectories".

Finally, we could possibly run into some objects cast off from the solar system in one of our orbits of the galaxy, since many millions likely were. Who can say that I2/Borisov is not a long lost comet from our solar system making its final pass by us after its ejection 4 billions years ago?! Only its proper motion in the galaxy compared to the solar system might be able to rule that out.
Last edited: Apr 7, 2020
You must log in or register to reply here.
Share:
Facebook Twitter Reddit Pinterest Tumblr WhatsApp Email Link