Should NASA make Boeing do another uncrewed test flight?

"Boeing and NASA are nearing the conclusion of detailed evaluations on how each Starliner system performed during last month’s Orbital Flight Test (OFT). This process is separate from the joint Boeing-NASA independent review team investigating the mission clock anomaly that precluded docking with the International Space Station. The thorough data analysis, which is part of the normal post-test flight review process, covers everything observed during prelaunch rehearsals and operations as well as the flight. Ultimately the analysis team will disposition anomalies and observations and evaluate which objectives were met and which require more work.

Independent of that process, Boeing announced January 29 that the company is taking a $410 million charge to provision for the possibility of another uncrewed test flight. While NASA will ultimately decide if an OFT re-flight is necessary, Boeing is as committed as ever to safe flight, mission assurance and helping our customer meet its crew transportation needs. This provisional accounting measure puts the Starliner program in position to support another flight should that mission be deemed necessary, while limiting the schedule impact on beginning regular Starliner service missions to the space station. The charge is intended to cover not only the cost of another flight test, but also the anomaly investigation and corrective action implementation, program disruptions and other work outside the scope of normal program operational costs post-OFT." 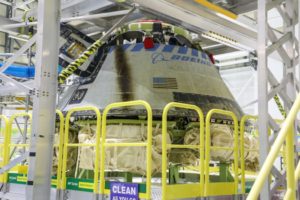