The matter in the universe is made out of positive energy. However, the matter is all attracting itself by gravity. Two pieces of matter that are close to each other have less energy than the same two pieces a long way apart, because you have to expend energy to separate them against the gravitational force that is pulling them together. Thus, in a sense, the gravitational field has negative energy. In the case of a universe that is approximately uniform in space, one can show that this negative gravitational energy exactly cancels the positive energy represented by the matter. So the total energy of the universe is zero.
Click to expand...

Both said that gravitational potential energy is negative energy and is the true energy that can cancel positive mass energy.

In standard cosmology, it is explained by introducing an entity that has a positive mass density but exerts a negative pressure.

Two bodies, placed at the distance R from each other and reciprocally not moving, exert a gravitational force on a third body slightly smaller when R is small. This can be seen as a negative mass component of the system, equal, for uniformly spherical solutions, to:

What about the universe with more mass?

3. New Friedmann's equations and the dark energy term from the gravitational self-energy model 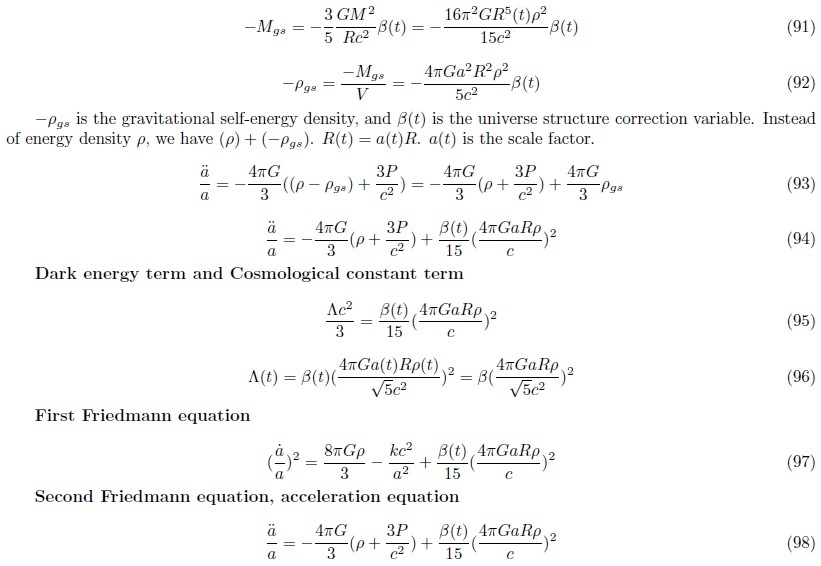 Finding the dark energy term with this model is similar to the standard cosmology value.
Gravitational potential energy is a concept that has already existed, and does not assume a bizarre existence that has a positive inertial mass and exerts a negative pressure. There are no problems like fine tuning or CCC problem.

*Background description
Why do we need gravitational potential energy or gravitational field energy?
1) The fundamental principle of general relativity states that “all energy is a source of gravity”. However, the field equation created by Einstein did not fully realize this principle

Different forms of energy as source of gravity : Gravitational energy in Earth

2. Explanation of GRAVITY PROBE B team
Do gravitational fields produce their own gravity?

A gravitational field contains energy just like electromagnetic fields do. This energy also produces its own gravity, and this means that unlike all other fields, gravity can interact with itself and is not 'neutral'. The energy locked up in the gravitational field of the earth is about equal to the mass of Mount Everest, so that for most applications, you do not have to worry about this 'self-interaction' of gravity when you calculate how other bodies move in the earth's gravitational field.
Click to expand...

Two bodies, placed at the distance R from each other and reciprocally not moving, exert a gravitational force on a third body slightly smaller when R is small. This can be seen as a negative mass component of the system, equal, for uniformly spherical solutions, to:

For example, the fact that Earth is a gravitationally-bound sphere of its current size costs 2.49421×1015 kg of mass (roughly one fourth the mass of Phobos – see above for the same value in Joules), and if its atoms were sparse over an arbitrarily large volume the Earth would weigh its current mass plus 2.49421×1015 kg kilograms (and its gravitational pull over a third body would be accordingly stronger).
Click to expand...

(2) Gravitational energy does not act as source of gravitation, in contradiction to the principle of equivalence. Thus, although Eq. (48) may be a fair approximation in the case of weak gravitational fields, it cannot be an exact equation.
Click to expand...

The fundamental principle of general relativity states that “all energy is a source of gravity”. However, the field equation created by Einstein did not fully realize this principle.

Most of the people who read this article will have a strong objection and antipathy to the negative mass (density), but~

1.The first result of Friedmann's equation for accelerated expansion was negative mass density

=====
Negative Mass?
Actually the first indication of the discovery!
=====

They had negative thoughts about negative mass. So, they discarded the negative mass (density) without sufficient scientific review. They corrected the equation and argued that the accelerated expansion of the universe was evidence of the existence of a cosmological constant.

However, many people say that the accelerated expansion is explained by negative pressure, and there is no such thing as negative mass (density).

Why don't mainstream talk about this (ρ+3P ≃ (+1ρ_c) + (-2ρ_c) = −1ρ_c) ?
Because there is preconceived notion about negative mass. So, they talk only to negative pressure, and stop explaining.

And, in the case of a universe with a larger mass,

Since mass energy is proportional to M, whereas gravitational self-energy is proportional to -M^2/R, as mass increases, the ratio of (negative) gravitational self-energy to (positive) mass energy increases.
Therefore, as the universe ages and the particle horizon expands, the phenomenon of changing from decelerated expansion to accelerated expansion occurs.

Please don't argue with negative mass density (don't think about whether it exists or not), shut up and it's time to calculate. Already, the accelerating expansion of the universe has become an important issue because it is a phenomenon contrary to the prevailing predictions of the mainstream. The mainstream was also wrong in its predictions about the rotation curve of galaxies. Dark Energy Problem and Dark Matter Problem.
One of the lessons of relativity and quantum mechanics is that we don't judge nature by the logic we learn in our daily lives.

Mass defect due to binding energy is a proven physics, and the formula says that on a cosmic scale, the size can also be greater than the mass energy.